Aatrox continues to be the number one top lane champion 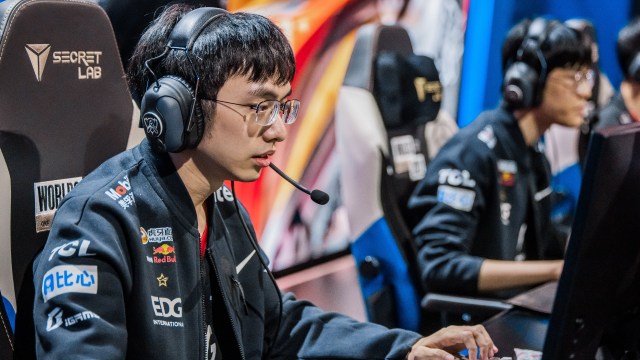 One of the unsung heroes for the reigning League of Legends Worlds 2021 champions, Edward Gaming, has been their rock in the top lane, Li “Flandre” Xuanjun.

As a top laner who is usually relegated to play support or tank style champions in the top lane, Flandre has also shown his ability to take over games on carry champions as needed. The flexibility was definitely shown so far at Worlds 2022 in the two games EDG have played as Flandre played the tank champion Ornn against T1 and the carry threat Aatrox against Cloud9.

One champion has fallen from the meta’s grace in the current patch while the other has the highest pick/ban rate in the entire tournament. Take a guess on which champion Flandre saw more success on.

During the draft in EDG’s match against T1, T1’s top laner Choi “Zeus” Woo-je, who has been heralded as potentially the world’s best top laner, locked in one of the strongest carry top laners on the patch, Fiora but when it came down to the very last pick of the draft, Flandre had counterpick advantage. As a player known for his incredibly deep champion pool, the possibility of a unique answer to Fiora seemed imminent. But to the disappointment of many watching, Flandre simply just locked in Ornn. The champion isn’t bad per se, but it’s definitely boring at best.

“We actually had better options than Ornn but we just went with the more consistent and stable pick,” Flandre said. “Personally, I didn’t think I performed well.”

That assessment was correct as Flandre had no answer to Zeus’ Fiora. Flandre ended the game with a poor statline of 0/4/4 while Zeus helped lead T1 to victory going 4/1/7 on the split-pushing threat. Essentially, Flandre didn’t have a real opportunity to impact the game before it was too late. But things drastically turned around in their next contest against C9.

Instead of waiting until the very last pick to select Flandre’s champion, EDG locked in Aatrox first, giving C9 counterpick advantage. Ironically, C9 answered the Aatrox pick with Fiora. Unfortunately for C9, the pick didn’t matter at all.

Flandre’s performance against C9 was night and day from the match against T1. Early in the game, Flandre was able to leave the top lane to help EDG secure an early double kill to put the team in front. Just a couple minutes later, Flandre again was able to roam mid-lane to push EDG’s advantage even further, something that he could not do on a champion like Ornn.

Flandre did note that the only real counter Aatrox has is Fiora but noted that it’s not even a strong one and that it just makes the matchup a coin flip. C9 apparently called it wrong. Flandre ended the game with an absurd damage-to-champions difference over everyone in the game, dealing 23,600 damage. The next highest damage was EDG’s mid laner Lee “Scout” Ye-chan who only dealt 19,100 damage.

Aatrox is currently the most picked champion at Worlds 2022

With an over 95% pick ban rate, Aatrox is definitely one of the most polarizing champions in the metagame. But that’s not to take away from Flandre’s performance. As someone who has a track record of being able to show up on any pick, it’s just a matter of time before he brings out a spicy counter to the top lane king. He just asks for fans to be patient.

“One little suggestion to our fans, don’t get too tilted when watching our games,” Flandre said. “We will definitely make adjustments after we lose games so don’t worry about it too much.”