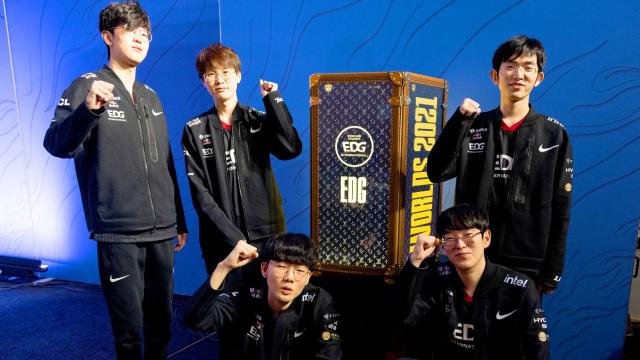 No two people stumble into fandom in the exact same way, but all fans are linked together through what they enjoy. There’s a sense of camaraderie that comes with the unabashed indulgence in something. Try talking to a model-making hobbyist about a rare Gunpla figure, or an anime fan about why the hottest show from the current season is overrated; “this person gets it,” they think.

Simply finding someone else who can appreciate the things we’ve poured hours, if not days, of our lives into is exhilarating. That’s because enjoying what we love and the highs and lows that come with it is fun.

Sports fandom, specifically esports fandom, is odd in that sense. Fans spend years of their lives allowing their emotions to be swayed by the results of other peoples’ hard work. They want them to succeed that badly. To fans, winning incites as much elation as losing does grief; they’re as much bystanders as they are onstage beside their favorite teams. Even still, it’s all worth it when that one team, that one player finally lifts the trophy.

That’s why Edward Gaming’s win against DWG KIA in the finals of the 2021 League of Legends World Championship was so special. Today’s victory was the final chapter of a story years in the making. EDG fans have endured ridicule over the team’s past shortcomings, rejoiced in small victories and watched legends like Ming “Clearlove” Kai come and go over the years.

Tonight, for the first time, EDG fans celebrated the crowning of their team as world champions.

A night to remember

“The victory of EDG means to me that youth is complete,” said EDG superfan Beibei. “From 2015 to 2021, there are peaks and valleys. We defeated two LCK teams to win the championship. Maybe we should finally be able to get the recognition of Chinese esports fans.”

Beibei was watching the series at a packed viewing party. When China’s No. 1 seed knocked down reigning champion DWG KIA’s Nexus for the third and final time, she raised her phone high and shouted: “We are the champion! EDG niubi!” The phrase, in context, essentially means “awesome,” “amazing” or a version of that with congratulatory curse words in front of it in English.

“I sent a victory post on my WeChat moment,” Beibei said. “Tomorrow I’m gonna buy boba for the whole office! Plus, I will buy the whole set of EDG champion skins.”

In China, Beibei’s way of celebrating EDG’s victory was common. Thousands upon thousands of other passionate Chinese fans expressed their elation and pride in the moment and took to sites like Weibo to share their joy. Some of them are the same fans that showed up in droves to fill malls and other venues for massive watch parties during the series.

Some others conveyed their emotions in different, and arguably more unique, ways. You know, like dunking their heads into toilets, shaving their heads and even streaking. It turns out, ahead of Saturday’s series, many fans placed bets saying they’d do ridiculous things in the event EDG walked away with the upset.

Why would someone do something so embarrassing in celebration of someone else’s achievement? Why are hordes of people flooding the streets and breathing life into an otherwise ordinary Saturday night by the sheer strength of their combined voices?

Because it might be nearly 8 a.m. in China, but around six hours ago, Edward Gaming fought through a grueling five-game series to win the Summoner’s Cup as their fans stood thousands of miles away, still supporting them through every high and low point in the series just to watch that cathartic moment.

What more reason could you need to sprint out into the streets, to stay up all night, to cheer and dance and sing? Edward Gaming won Worlds. For these fans, that’s enough.

EDG are no longer crownless kings; their royal subjects rejoice

Fandom, and the trials and triumphs that come with it, often brings us closer to even the faintest aspects of what make makes us who we are, even if just for a moment. In celebrating victory, even the reserved fan can become the center of attention in an instant. It can also render the boldest fan in the room speechless, unable to express how they’re truly feeling for what might feel like the first time ever.

Sometimes that’s because we can relate to the stories of those we cheer for. In the case of Edward Gaming’s veteran support Tian “Meiko” Ye, he’s been trying for nearly seven years to win Worlds, yet before Saturday had never managed higher than a quarterfinal finish at the tournament. Even still, he never gave up, and his first world championship win is a testament to his will to persevere. Now, that same will is going to be immortalized within the very medium he used to achieve what he defined as one of the best moments of his career through an in-game skin.

As someone who’s followed Meiko and his teammates all this time, through all the ups and downs, EDG superfan Linda, who goes by @iCrystalization on Twitter, can relate to this.

What a Playoffs run. #Worlds2021 pic.twitter.com/1eD7qFpJkF

“You always hear how hard work pays off in the end, and I know every team works hard, but in EDG’s case it always felt like they faltered when it mattered, and that their aspirations were simply too big for them to carry on their shoulders,” Linda said. “You dominate your region and then you fall short internationally, and it doesn’t matter how much you win domestically if you can’t perform at Worlds. That’s just how it is. And EDG were always the laughing stock. And I mean it: ALWAYS.

“So to see them actually grind their teeth and fight tooth and nail for three whole best-of-fives and see it actually PAY OFF for once, it’s just an indescribable feeling.”

Nobody knows how Linda will celebrate this win after she recovers from thoroughly live-tweeting every moment from Saturday’s series. However, she and the countless other EDG fans choose to, however, will be fully deserved and well-earned, because sometimes earnestly wishing for the success of someone else takes just as much willpower and effort as working towards that success yourself.

Let it be known that on Nov. 6, 2021, the day Edward Gaming finally lifted the Summoner’s Cup for the first time, EDG fans celebrated triumphantly and with reckless abandon. They were on top of the world, soaking in the glory of a title earned by five people they’ve never met. And they were happy that seven years of working, and seven years of believing, finally paid off.