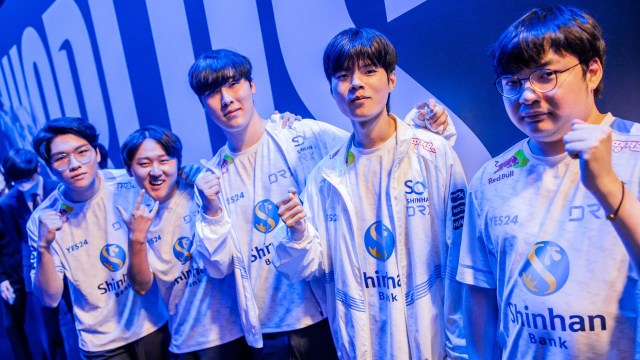 Provided by Riot Games/Getty Images/Colin Young-Wolff DRX show they are the most mentally tough team at Worlds 2022 as they reverse sweep their way into the semifinals.

In perhaps the biggest mental collapse in League of Legends history, the reigning Worlds 2021 champions Edward Gaming became just the second team ever to get reverse swept at Worlds after their Worlds 2022 quarterfinal loss to DRX in what was also the biggest mental turnaround ever seen.

Game 1 came down to a battle between the top and bot lanes. With DRX indexing heavily into the Ashe and Heimerdinger, EDG looked towards the Fiora counter, Kennen. With both counters working, the onus was on Li “Flandre” Xuanjun to take control in team fights and with EDG the better team fighting team, that’s exactly what happened. The fact that Lee “Scout” Ye-chan was unkillable on Azir created the incredible one-two punch EDG needed to win every team fight and although the game was scrappy, it was EDG that came out on top to go up 1-0 in the series.

Game 2 will be remembered for years to come; EDG thought Ashe was the problem, but in reality, it was always Heimerdinger. In the early game, it appeared that EDG were right, bullying Cho “BeryL” Geon-hee killing him five times early. But it didn’t matter because Heimer was oppressive with his CC. As a result, it was DRX that were able to take complete control and push a massive gold lead that at one point ballooned to 11k. But DRX didn’t play like they had the lead they did, and despite their position, EDG played with confidence and pushed DRX back.

Winning teamfight after teamfight, EDG were making DRX play off the back foot. But behind their strong front was a very weak base; DRX finally called EDG’s bluff as Kim “Deft” Hyuk-kyu backdoored their base to win Game 2. However, right before the game-ending attack, EDG’s inhibitor respawned, Deft died and EDG’s base was still intact. In perhaps the most heartbreaking moment in League history, DRX could only watch EDG march down mid-lane to grab set point.

Somehow, DRX were able to claw back from their myriad mistakes to play a solid Game 3. The terrible limits from EDG’s draft came to light as their bot lane was utterly useless. Park “Viper” Do-hyeon was limited by a myriad of bans thrown at the bot lane position and was forced onto Kalista, a champion that has not been good at Worlds 2022 with only having a 40% win rate in 22 games according to Gol.GG. The only good pairing for her, Renata Glasc, was also picked up by EDG; but Kim “Zeka” Geon-woo on Sylas ended up using her ult better than Renata did. As a result, EDG dropped Game 3.

DRX continued to do the impossible in Game 4. They came in confidently with a wild Ashe support pick, and despite EDG’s strong bot lane, DRX still controlled the map. Once again, EDG having Renata was useless, and EDG ended the match tilted. DRX had pushed EDG to the brink to force Silver Scrapes.

Game 5 saw EDG continue to mentally collapse under pressure. Despite being last year’s Worlds 2021 finals MVP, this was Scout’s worst game of the tournament; he continued to lose ego battle after ego battle against the young Zeka. EDG looked pathetic in their Worlds 2022 exit.

An absolute credit to DRX for coming back from their terrible 0-2 start. They continue their improbable run against Gen.G in the semifinals.