EDG broke the curse, and reversed their fortunes against RNG to advance to first ever Worlds semis 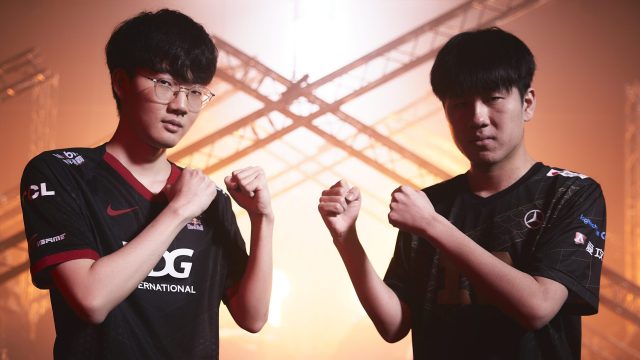 For the first time in the organization’s history, Edward Gaming have made it past the quarterfinals with their win over Royal Never Give Up at Worlds 2021.

EDG made it to the quarterfinals four times at Worlds and were 0-4 before this series. Even though they were favorites coming into Worlds 2021, RNG have had EDG’s number big time in recent history. In the last 11 series between these teams, RNG was 10-1. They are now 10-2.

“We haven’t had a win against RNG in such a long time,” EDG top laner Li “Flandre” Xuan-Jun said in his post-match interview on the Riot Games broadcast. “So I’m happy about this part.”

EDG will face the winner of Monday’s matchup between Cloud9 and Gen.G in the semifinals.

After RNG took Game 1 of the series, EDG came roaring back in Games 2 and 3 and set up a match point. But RNG brought out the Annie pick for the second time in the series, and in Game 4 it worked as RNG led from the beginning of the game and never let go to force the all-deciding Game 5 at Worlds 2021. It was a fitting end to the 2021 saga between these two teams. The last time they played a best-of-five was the 2021 League of Legends Pro League spring playoffs, and that series also went to five games.

Every game up to this point in the series has been one-sided, and Game 5 was no exception with EDG racing out to a 9,000-gold lead at 26 minutes. Jungler Zhao “Jiejie”  Li-Jie and Flandre led EDG through the series to that decisive result, with bot laner Park “Viper” Do-hyeon closing out Game 5 with a 7/1/7 KDA (kills/deaths/assists) on Ezreal against their longtime rival to make the Worlds semis for the first time. Jiejie and Flandre ended the series with 13/13/34 and 18/18/20 combined KDA respectively.

EDG entered 2021 as a dark horse in the LPL. However, very quickly the dark horse turned into an LPL favorite. They tore through the spring split sitting near the top of the standings the entire split. They made it all the way to the semifinals before losing a heartbreaker five-game series that went the distance against FunPlus Phoenix. In the losers bracket, they lost another five-game thriller at the hands of RNG.

In the summer split, they were even better and once again placed in the top two heading into the playoffs. It was in the playoffs that they dropped to the losers bracket at the hands of Team WE. However, EDG made a dominant losers bracket run. They ran through LNG, WE, and FPX on their way to their first LPL title in three years and the first seed from the LPL heading into Worlds 2021.

EDG came into Worlds 2021 as a championship contender. After a somewhat shaky group stage, EDG returned to form in the quarterfinals. They await the winner of the Gen.G vs Cloud9 to see who their opponent for their first-ever Worlds semi-finals will be.

“I feel like no matter who get the win we’ll definitely need to study their playstyle because I think all the teams are very strong.” Flandre said.

RNG came off a very successful first half of the 2021 season, where they won the LPL spring split, defeating EDG on the way there. At the Mid-Season Invitational, they marched all the way to the finals after defeating PSG Talon 3-1 in the semifinals. In the final, they defeated the reigning world champions, DWG KIA in a close 3-2 series.

The summer split didn’t start off too hot as they were 1-5 before turning it around and finished 10-6. In the playoffs, their run was unexpectedly cut short by the future LPL worlds representaive, LNG Esports in a 3-1 series. They still made it to Worlds 2021 through championship points.

RNG came into Group C at Worlds 2021. After a 3-0 Week 1, RNG struggled in Week 2. They went 1-2 and even faced a tiebreaker for first place against Hanwha Life Esports but ended up winning the tiebreaker to get out of groups as the first seed.