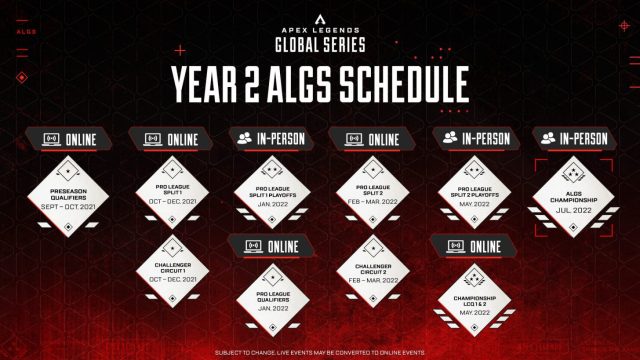 During the EA Play live stream on July 22, Apex Legends game director Chad Grenier announced plans for Year 2 of the Apex Legends Global Series (ALGS). EA provided further details for the new season of competition on their site, including plans to return to in-person LAN playoffs “if conditions allow.”

ALGS returns for Year 2 in September

The ten-month circuit will begin with preseason qualifiers in September. Over four weeks, entrants will fight to earn one of 20 spots per region in the ALGS Pro League. EA will invite an additional 20 teams directly. After preseason qualifiers conclude, the competition will play out over three splits, which mirror the seasonal circuits from 2020-2021. Each split will conclude with 40-team global playoffs, which EA hopes to host live and in-person. This would be the first major LAN competition for Apex since the 2019 Krakow Preseason Invitational.

While initial plans for the first year of ALGS included an in-person global final featuring 40 teams from across the world, the Covid-19 pandemic forced things online. EA instead held regional championships for each of the five ALGS regions. In July 2022, they plan to host a 40-team global final, again, if conditions allow.

In addition to the ALGS Pro League, EA will host a new amateur Challenger Circuit. While EA has not yet provided details on how exactly the Challenger Circuit will operate, they have confirmed that top teams by ALGS points each split will earn a chance to qualify for the next Pro League split. The bottom eight teams in each region’s Pro League will play for their spot against the Challenger teams.

The new season of ALGS will also be the first in which console players can compete. Teams on Xbox and PlayStation platforms will be able to enter “using PC-value aim assist settings,” to maintain competitive integrity. Nintendo Switch players will not be eligible to compete.

If you’re yearning for competitive Apex in the interim, be sure to tune in to BLAST Titans this weekend.

Charlie Biggerstaff
Charlie is an esports journalist primarily covering Apex Legends. He's been playing FPS games since Halo 3 and enjoys backthrow-shining his friends off of Dreamland in his off time.