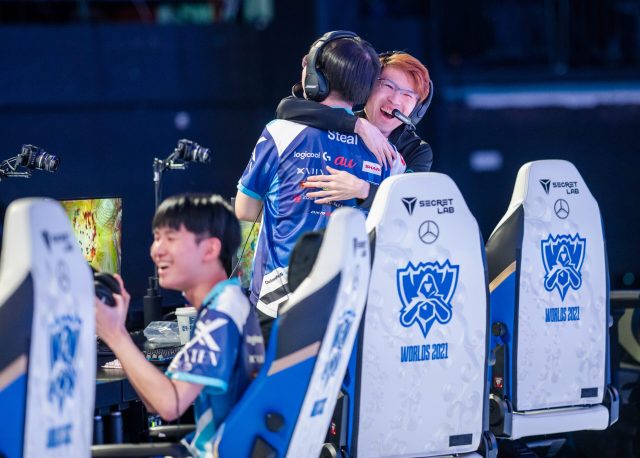 Photo by Michal Konkol/Riot Games NA hype it may be, but we have eyes on 100T

That’s where I come in. At alacrity.gg, I built a machine learning model and trained it on over 35000 professional League of Legends matches to predict each team’s probability of winning in any match. Squared up against the odds market, we can find matches that generate positive-value bets.

As the group stage of Worlds 2021 plays out, I’ll come back every day with a few highlights of interesting matches. Read on for my Day 3  Worlds 2021 bet picks!

The trend of betting against obvious favorite FunPlus Phoenix continues for Worlds 2021 bets. The thing is, no team is undefeatable, and it only takes one upset to make up all of the money from lost bets. Sure, it’s possible that that upset never comes, but if you bet on enough matches, as long as your reasoning is sound, you’ll get there in the long run.

FPX are predicted at 75/25 against Rogue by the market. I’d put it at 66/34 – still not looking great for RGE, but enough upset potential that a small bet is worth making.

The story here is pretty simple. FPX are stronger, there’s no doubt about that. They are more dominant in their own region, with higher win rates, larger margins of victory (and closer margins of defeat), and strong teamwork. They’ve managed all of this in a stronger region as well.

It all comes down to how much stronger China is as a region than Europe. By my model’s calibration, the gap isn’t as large as you might think. Rogue are still outclassed, but a one-in-three chance is better than a one-in-four chance, so a small bet for a potentially large payout makes sense.

All hopped up on NA hopium, I’m quite liking 100 Thieves’ chances here. I had predicted that 100 Thieves and T1 would be almost perfectly evenly matched in this group, and now we have our first test of that claim.

With side selection going their way, 100T have a slight advantage, putting them at 56/44 against T1. The market would have claimed 39/61, with a pretty sizable advantage for the Korean squad. This leads to a fairly sizable bet suggestion.

These two teams are quite similar: similar ranges and spreads of win rates, similarly consistent rosters, similar margins of victory. In fact, 100T have synergized more strongly as a team, with relative newcomer Felix “Abbedagge” Braun in particular fitting in quite well and elevating both his own performance and that of his teammates.

Korea is indubitably a stronger region overall, but North America is still a major player capable of putting up results.

“Evenly matched” may not spark the greatest optimism, but if I can bet on a coin flip where I win more on heads than I lose on tails, you know I’d take it.

The big story here for Worlds 2021 bets is the absence of Fnatic’s Elias “Upset” Lipp, due to a family emergency. His stand-in is their academy bot laner, Louis “Bean” Schmitz. Odds lines have shifted dramatically in the wake of this news to now favor PSG Talon, and I think they’re overcompensating.

Certainly, FNC would be a stronger team with their normal roster. Frankly, though, their teamwork was not fantastic anyway. Their performance as a squad has not been an improvement over their individual performances, which is what you would hope to see. There is always some intangible aspect of playing with a consistent roster, but it seems to be muted for FNC.

The biggest strike against Bean is just his professional experience. Academy games aren’t a great proxy for major league play, and jumping straight to Worlds is a heavy burden. Various regional strength factors take this into account, but the rest of the FNC squad should still give them the advantage over PSG.

If Bean can handle the immense pressure of being called up to Worlds, not try to do anything too fancy, and let the rest of his team dictate the pace and terms of the game, their overall experience should still leave them as the better team. This match was never going to be completely one-sided anyway, so this is far from a sure thing, but a small bet on FNC, or really a small bet on Bean, can pay out disproportionately to risk.

Another North America/Korea matchup, but this one will be a tough battle for Team Liquid. The market is giving Gen.G a 62% chance to win, and I’m in pretty close agreement, so any possible betting value just gets swallowed by the vig.

GEN are similarly dominant within their own region, with slightly higher individual player win rates and a more consistent roster. Both teams win their games by similar margins, so no distinct advantage there.

Both teams were the No. 2 seed in their respective region, so GEN get a slight edge over TL by virtue of the LCK’s higher region strength factor over LCS.

Overall, Gen.G do not massively outclass Team Liquid in any one aspect, but are consistently at par or marginally better, which gives them a clear advantage going into this game. With no differential view relative to the market, there’s no reason to bet.

Vanya Kirillov
Vanya is the founder of alacrity.gg, where he leverages seven years of quantitative finance experience to build esports prediction models. He'll happily debate you on anything from math to video games to the impending subjugation of the human race by artificial intelligence.