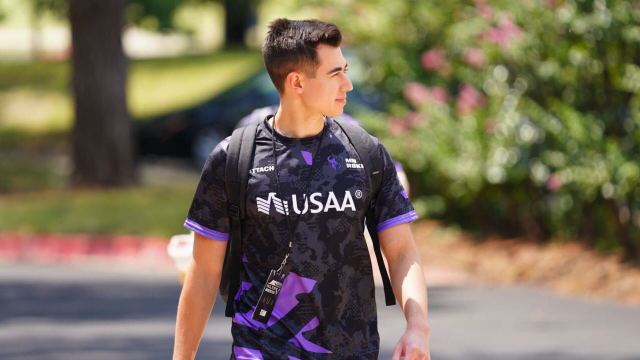 Like most Domri planeswalkers we’ve seen before, such as Domri Rade and Domri, Chaos Bringer, this card rewards you for playing an aggressive creature deck. It should be noted that unlike his previous iterations, he doesn’t provide any form of card advantage with his abilities. Instead, he boasts a static ability that boosts your team of creatures’ power. This lets you swing in for massive amounts of damage if you go wide. His plus-one ability enables you to ignore counter magic entirely, ala Rhythm of the Wild while ramping you for a little bit of mana. His minus-two lets your creatures fight others to protect him and trade well.

This new Domri is definitely playable, with 3 abilities that make him extremely powerful. However, with both Domri, Chaos Bringer and Rhythm of the Wild still in standard, he will have a hard time competing for a slot in many Gruul aggro decks. He has the ability to protect himself but doesn’t do much on his own outside of a creature heavy deck.

Expect Domri to see play in constructed as an alternative to the aforementioned cards, more so if he proves to be better than either.

Nissa, Who Shakes the World

The newest Nissa planeswalker does not fail to impress, bringing three powerful abilities to the table. Her static ability is an upgraded Vernal Bloom, making all your forests tap for twice the mana. Combo this ability with Zacama, Primal Calamity or Wilderness Reclamation to make huge amounts of mana. Her plus-one ability makes your lands into 3/3 creatures. Her ultimate ability is extremely powerful as well, getting all the forests out of your deck and rendering them indestructible.

Playing Nissa and then playing Zacama on the next turn looks to be one of the most powerful combos in Standard going forward. The massive X spells that her static ability enables (such as Hydroid Krasis, Banefire, Exansion//Explosion) are enough to swing the game in your favor easily. Even better, these spells are already playable on their own! Other possible routes to take are Omniscience, or even the notorious Nexus of Fate. Her +1 ability is nice but does open the door to being blown out by creature removal. Keep that in mind when using it. Her ultimate ability is nice and has a huge amount of ramp, but it doesn’t win the game nor impact the board directly. I would not recommend playing her as a finisher planeswalker by any stretch.

Expect Nissa, Who Shakes the World to be a powerful card in Standard that ramp decks use to cast huge spells turn after turn. This ability alone enough is enough to make her playable. Don’t expect her other abilities to see much use outside of the late game when players have extra lands to spare.