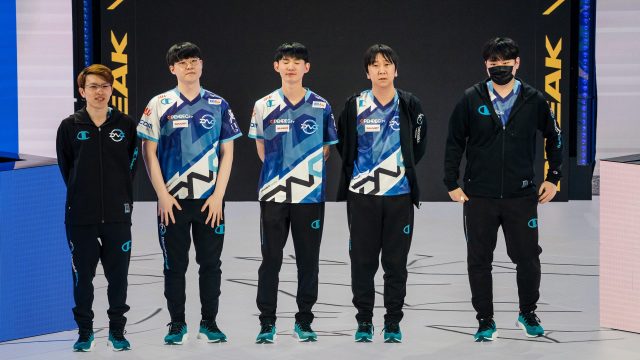 Photo via Riot Games/Getty Images. DFM's qualification for Groups may be the first sign of the LJL's rise.

The League of Legends Japan League made history on Day 3 of the 2021 League of Legends World Championship by becoming the first-ever Japanese team to qualify for the Group Stage after DetonatioN FocusMe humbled Cloud9 in an explosive tiebreaker match. They will be placed into either Group A, Group B or Group D of the main event.

In an informative primer on DFM ahead of the event, LJL casters affectionately referred to the winning lineup as the “LJL Exodia” due to the raw talent of the players on the roster compared to their regional counterparts. Their 4-1 finish in play-ins certainly does this name justice, as DFM have been one of the most consistent teams in Group B.

DFM started the tournament with a win over Unicorns of Love followed by a loss against Cloud9. From there, they quickly adjusted and established themselves as top contenders in the group. Cloud9 started Day 3 as the undefeated frontrunners of Group B, but after dropping a critical match against Unicorns of Love (who’ve now bowed out of Worlds), DFM took full advantage of their chance to seize the top spot. The team started Day 3 with a win against Pacific Championship Series representatives Beyond Gaming and are ending it with a well-earned spot in the Group Stage.

The world got a taste of the strength of the LJL during the 2021 Mid-Season Invitational when DFM nearly defeated DWG KIA to advance to the next stage before suffering a heart-breaking loss that came down to the wire.  While the group they will slot into has yet to be officially confirmed, the real test for the LJL hopefuls will come in the Worlds Group Stage, where the team could face the likes of Edward Gaming, T1 and Royal Never Give Up.

“DFM not only making Groups but making Groups in the way they did shows the stuff this team is made of,” he said. “It’s history for the LJL made in the most glorious of fashions; don’t count these incredible players out.”

You should have fucking listened ❤️

DFM to groups, my heart's overflowing y'all

The Group Stage will kick off on Oct. 11 at 7 a.m. ET with DWG KIA’s match against FunPlus Phoenix.