Despite 3-2 loss to DWG KIA, T1 and Faker begin a new era - Upcomer

Despite 3-2 loss to DWG KIA, T1 and Faker begin a new era

Worlds 2021 may not have ended in fireworks and confetti for T1, but their performance bodes well for their future 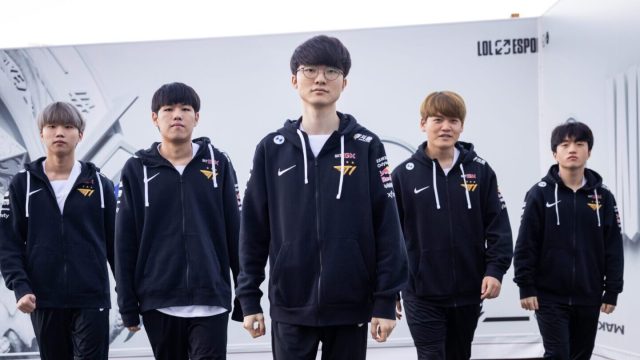 Provided by Riot Games/Getty Images With an army of Rookies beside him, Faker helped renew T1's dynasty

They’re the best team in the history of League of Legends. Nobody can compare to that, not DWG KIA, not Gen.G/Samsung, not the ROX/KOO Tigers, not Royal Never Give Up, not Edward Gaming, not G2 Esports, not Fnatic, not Team Liquid, not TSM, not anyone. T1, formerly SK Telecom T1, is the definitive best team who has ever graced the esport. And despite falling in the semifinals of the 2021 League of Legends World Championship, they’ve started a new era for themselves to further cement their legacy.

There is a pretty huge difference between the T1 of Worlds 2021 and the SKT of 2016, their last time taking home the Summoner’s Cup, however. For starters, the roster has only one remaining member from the original SKT dynasty — the Unkillable Demon King himself, Lee “Faker” Sang-hyeok. But of course, beyond the individual roster changes and the team’s rebrand, T1 has a much more fresh and promising dynamic than it has since their last trophy.

The status quo of the @LCK_Global and a shot at Worlds history are on the line.

In 2016, the roster consisted of known veterans and legends across the board. In the bot lane, they had Bae “Bang” Jun-sik and Lee “Wolf” Jae-wan, each having been with SKT for a few years and already won Worlds and MSI previously. They also had a pair of junglers who traded back and forth, with Bae “Bengi” Seong-woong having won two Worlds prior with SKT, and then Kang “Blank” Sun-gu, who was newer to the team, but provided a different playstyle and champ pool for the team.

The only role with a somewhat untested player was in the top lane. It was Lee “Duke” Ho-seong’s first World Championship in 2016, but two years later, he became the sole player to win Worlds on two separate teams.

Fast forward to 2021, however, and you see an entirely different story. Not only has SKT become T1, but Faker is now surrounded by rookies and first-time international players. Faker has played over 150 games between MSI and Worlds. The rest of his team combined sit at well less than half of that, with just 65 international games between them all.

For Kim “Canna” Chang-dong in top, Moon “Oner” Hyeon-joon in jungle and Lee “Gumayusi” Min-hyeong in bot lane, this is their first-ever international League of Legends experience. And for Ryu “Keria” Min-seok at support, it’s only his second international event. Faker has been to six Worlds now, and the rest of his team combined sits at just five.

But “Faker and the zoomers” only barely begins to paint the picture of T1 at Worlds in 2021. They had a tumultuous time just getting to the esteemed year-end competition, going through multiple roster changes throughout both spring and summer, and being on the losing end of pretty one-sided series in both splits as well.

I feel really bad watching how it all ended and knowing how much of a turnaround the team did despite so many hurdles/problems to overcome this year. I genuinely thought after game 3 that this was going to be a T1 championship year. I just feel sadness atm idk. See you all tmrw

Not only did they shuffle around the roster countless times, but partway through the summer, they fired their two main coached and promoted an academy coach and an assistant coach to run the team for the rest of the year. It was a young roster with limited experience, both domestically and internationally, led by recently promoted coaches and Faker himself. The team hovered between fourth and sixth place the whole summer. If there was any year for T1 to bomb out, it was in 2021.

But instead, they topped their group and advanced to the semifinals, taking two games off the current World Championship defenders who are otherwise undefeated at Worlds 2021.

T1 was one single teamfight away from stealing the series away from them, and even though they didn’t, they got closer than they ever should have given the circumstances.

After the series, Faker shared some of his thoughts about the young roster surrounding him and what his role was throughout the tournament. “I feel this responsibility to always behave well and I think I have to play the game well as well,” he said. “Now that I’m the oldest player on the team, I feel a sort of generation gap between the younger players.”

Later in the T1 press conference, Keria shared his relationship with Faker and the rest of the team as the only other player who had been to Worlds previously. “Faker, not only the way he plays the game, but also the way he behaves in real life, is always exemplary so I try to learn a lot from him,” he said. “Also, throughout Worlds, we really gave our all and we were working so hard. Throughout that experience and process, I think we have learned a lot.”

He improved greatly from his first Worlds in 2020 to today, nearly taking down those 2020 victors, and the rest of the team looked entirely leveled up from the playoffs and Regional Finals. Less than two months ago, they were nearly upset by Hanwha Life Esports, who also improved throughout the 2021 World Championship, and last week they demolished them in a 3-0 series. It’s clear that T1 has leveled up a lot.

Reflecting back on the tournament, Son “Stardust” Seok-hee, T1’s interim head coach, had a lot of positive things to say about the rookies on the team. “[The younger players] are always very bold; sometimes they do even better than the experienced players. I have never run into any obstacles regarding [their experience],” he said. “They are always willing to progress forward, so thanks to that we were able to find great synergy and have great teamwork.”

T1 have set themselves up for an incredible off-season. Through all of the roster changes, they’ve shown off the skills of numerous players they currently aren’t using, and then through the end of the season and in Worlds, they proved their systems work through the performances of all their fresh faces.

All three of the first-timers have only ever played for T1 professionally. That means the team has proven its ability to scout and train players, even in a rocky and broken year, and challenge the absolute best of the best, pushing them to an Elder Dragon fight at the end of a Silver Scrapes series.

T1 may not have won Worlds in 2021, and they didn’t even make it to the finals, but they still proved their strength and laid the solid foundation for their next dynasty. The non-Faker components had but 61 games of combined international experience at the end of their run at Worlds, but next year, they very well may more than double that.

With this roster, Faker could find his fourth title in North America in 2022, right where he won his first in 2013. It’s been a few dry and desolate years for the mid laner, but T1 and Faker’s new era has begun.