The first two matches will be Astralis vs. Copenhagen Flames and Team Spirit vs. FaZe Clan 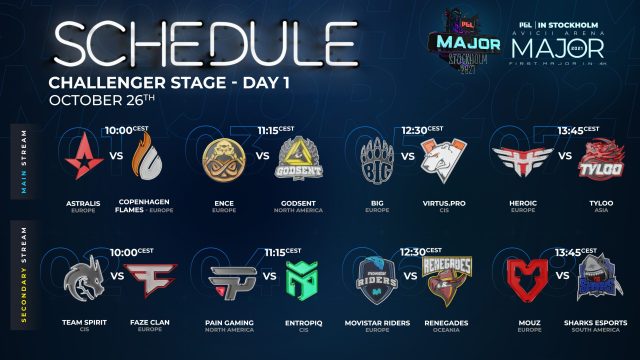 Provided by PGL The first day of matches at the PGL Major Stockholm 2021.

The matches are now set for the first day of the PGL Major Stockholm, Oct. 26. Tournament organizer PGL released the schedule for Day 1 of play, which kicks into motion the New Challengers stage of the competition.

The day one matchups are as follows:

There are two particularly noteworthy clashes set for The PGL Major Day 1: a Danish derby between Astralis and the Copenhagen Flames, and what is expected to be a close battle between the world No. 12 and No. 13 ranked teams, Virtus.pro and BIG.

📆The first day of the Major – October 26

The teams competing in the New Challengers stage are those who qualified with Contender or Challenger status based on the amount of Regional Major Rankings points they accrued over the past year. They were seeded against each other so that the teams with the highest RMR points from the strongest regions — based on the number of teams the region sends, with Europe as the highest — play their lower seeded opponents.

This first stage is a Swiss-style format where a team must win three matches to qualify for the next leg of the competition, or lose three to be eliminated. The winning teams from the New Challengers stage will advance to the New Legends stage, another Swiss bracket that features the teams who qualified to the major with Legend status. Finally, the New Champions stage will take the remaining eight teams and pit them against one another in a single-elimination bracket in front of a crowd at Stockholm’s Avicii Arena.