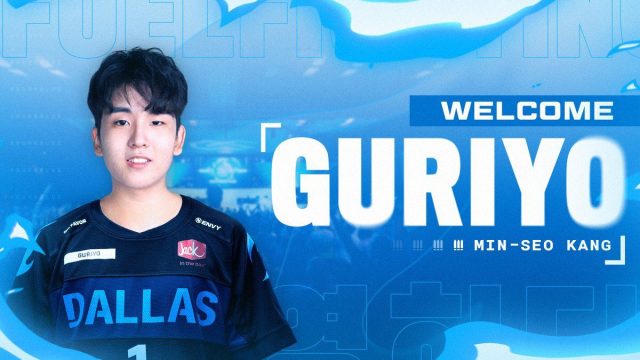 Guriyo’s path to the Fuel

Guriyo’s competitive career started back in late 2019 in the Pacific Contenders region. He began competing in Open Division for team Bad to the Bone PAC. After one season in the Pacific region and another in the Korean region, he joined the Open Division team BlossoM for most of 2020. Along with his team, he reached fourth place in back-to-back seasons of Open Division, enough to compete in Contenders Trials. For guriyo in particular, his affinity for hitscans like Widowmaker and Ashe made him a specialist on specific maps.

With guriyo joining alongside fellow hitscan player Kim “Edison” Tae-hoon, the Dallas Fuel are preparing for the 2022 season by adding significant depth to their DPS position. One of the biggest stories for the Dallas Fuel in their last season was their star hitscan Jung “Xzi” Ki-hyo having to take a break due to back and neck pain. The team had to use their only two DPS at the time, Kim “SP9RK1E” Yeong-han and Kim “Doha” Dong-Ha, in every game.

When the Fuel won the May Melee, they knew they needed to address this. So, they tried to add veteran hitscan Kim “Pine” Do-hyeon. He couldn’t make it in time to be integrated into the roster due to VISA issues, never playing a map for the Fuel. Despite how great Dallas were in 2021, DPS depth was an issue that revealed itself more as the season progressed.

These signings, especially guriyo, show how Dallas is learning from their mistakes. They want to be sure that in the 2022 season, one player leaving doesn’t mess up their plans. Either way, the Fuel are aiming to contend in 2022 with this finalized roster and fix the issues that plagued them in 2021.