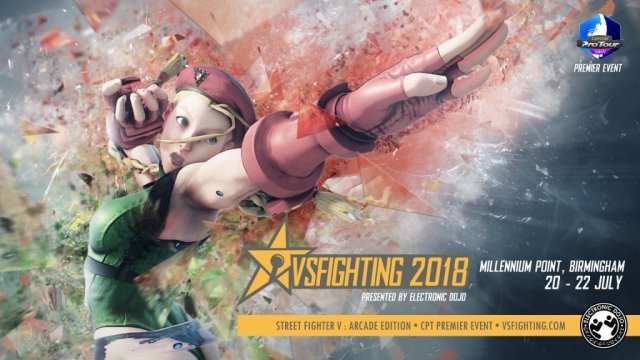 After an explosive weekend of epic match-ups, Daigo “The Beast” Umehara has won the VSFighting Street Fighter V tournament for 2018. This is the first premier win for the 37-year-old fan favourite and Street Fighter veteran.

Saturday’s pools and Top 32 saw the shocking elimination of Infiltration at the hands of Echo Fox’s Justin Wong. The competition was fierce heading into Sunday’s finals. By Saturday night, the winners and losers brackets looked like this:

The Top 8 kicked off with Fujimura matched up with UYU’s NL. Fujimura, the favourite to take the tournament, was fresh off the back of his championship win at CEO 2018 at Daytona Beach earlier this month. Fujimura won his rounds, sending NL to the losers bracket Round 2 playoffs.

Daigo’s first match-up in the winners bracket was with European favourite, NASR’s Big Bird. Big Bird switched up between playing Ken and Zeku, but he was overtaken by Daigo’s confident moves. Big Bird was sent to the losers bracket to play against Justin Wong.

Later, the home crowd rallied behind local player Fnatic’s Shakz, who finished tied for fifth with Big Bird. The games between Shakz’s Laura and NL’s Cammy were some of the most nail-biting moments of the tournament. Almost every round was down to the wire. NL’s experienced patience and ability to react, however, won him the match-up. He went on to play Justin Wong, edging himself out just enough to take the win and put himself into the losers finals, again facing off against Fujimura.

Going into the loser’s final, Fujimura appeared calm and collected, with NL struggling with the heat at Birmingham’s Millennium Point. With some close games, NL had an uphill battle ahead of him, but couldn’t quite pull off the win. NL took third place in the tournament.

In the end, all eyes were on the final match-up between Fujimura and Daigo. The pair had already played in the winner’s bracket, with Daigo securing the win for a spot in the Grand Final. It was the world’s best Ibuki versus the world’s best Guile. The final 5 games looked like this:

The last set was extremely close with the first four games rendering a two-all result. With Fujimura widely considered one of the best Street Fighter V players in the world, the pressure was on for Daigo in the fifth deciding game. Daigo’s first Capcom Pro Tour win was monumental. The Beast apparently spent hours studying his previous match-ups with Fujimura, and the study clearly paid off.

And there you have it, @daigothebeast is your #VSF2018 champion after defeating @fujimura333 in a hard fought battle! #CPT2018

The next stop on the Capcom Pro Tour is EVO, being held at Mandalay Bay in Las Vegas from August 3. Will Daigo be able to make it two wins in a row?