RNG sit 3-0 at the top of Group C, but they still have a long journey left 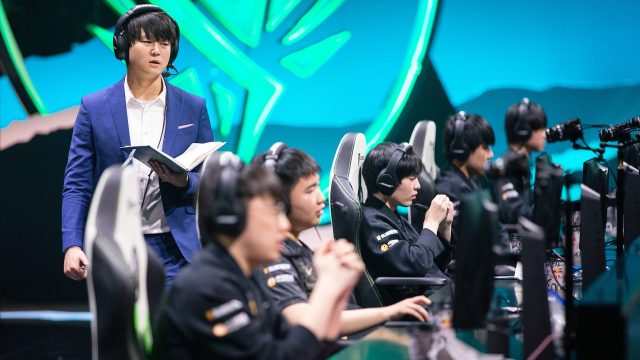 Coach Chang “Poppy” Po-Hao has once again taken the reins of leadership in Iceland, since Royal Never Give Up’s head coach, Wong “Tabe” Pak Kan, was unable to make it due to visa issues and has been coaching remotely. With more weight than usual on his shoulders at Worlds 2021, Poppy is primarily focused on helping RNG escape groups, which means overcoming the likes of Hanwha Life Esports in Group.

“We expected Hanwha Life Esports to be one of the more competitive teams in the group itself, and as you could see in the game, it was very much a struggle against them,” Poppy said. “We were lucky to finally come out with the win at the end.”

Despite a spotless 3-0 record, RNG played a grueling, 40 minute game against the League of Legends Champions Korea’s fourth seed. It’s a perfect example of how the 2021 Mid-Season Invitational 2021 champions’ journey hasn’t been easy, especially after their League of Legends Pro League playoffs loss against LNG Esports. But they’ve persevered and are ready to show the world that they are serious contenders for the title.

It was close but we managed to win the final teamfight of the game and move to a 3-0 record!

Indeed, even at 3-0, RNG understand that they cannot rest on their laurels. Support Shi “Ming” Sen-Ming mentioned in the post-match interview that he thinks all their victories were hard-fought and that the second-round robin will prove more challenging. But with a solid understanding of team compositions to lean on, Poppy things RNG can maintain their form at Worlds 2021.

“I think our greatest strength is our understanding of compositions,” he said. “The players themselves really know how to pilot the compositions that they’re given.”

A clash of ideas

Historically, the LPL vs LCK narrative has often dominated the field of international competition. It’s an intense rivalry fought among the best of the best. With DWG KIA as the current defending champions and RNG having defeating them in MSI, the fight for the title of World Champion between the two regions is going to be a boiling cauldron of emotions.

Currently, at Worlds 2021, the rivalry is ongoing and fierce, with the LPL’s combined score at 10-2 and the LCK at 8-4. Two teams from each region are topping groups. For Poppy, the clash between the two powerhouse regions comes down to different approaches to the game.

“I think the clash between regions is a clash between the understanding of the game,” Poppy said. “In terms of our scrims, we do feel like LPL and LCK are coming in with different reads on the meta. But I think this meta, there’s a lot of variety in it. It really depends on what your team composition needs and how your players can play it.”

Poppy also mentioned that he believes these differences will start to meld with one another and the strength disparity between teams will grow closer as the tournament continues.

The second round robin will test the mettle of the teams in Group C. Despite a nice 3-0 cushion, RNG will be doing their very best to exit as the first seed and advance to the knockout stage comfortably. But with a plethora of internationally renowned names and teams as potential opponents, who does Poppy wish to face, assuming RNG do make it that far?

“The team I want to meet the most is definitely T1 because they’re such a good team,” he said. “But I hope that we can meet them a little bit later in the playoff bracket.”

The moments when our team stole the game.
See you this Saturday. 👋#T1WIN #T1Fighting pic.twitter.com/yaOyd8TdOF

Like T1, RNG remain a historic name in the world championship due to their past accomplishments and results. In 2018, led by the legendary marksman Jian “Uzi” Zi-Hao, RNG almost paved the golden road to a grand slam victory by winning every tournament they participated in during the year. But alas, it was not meant to be, as they fell in the quarterfinals.

The golden path eludes RNG for 2021, but Poppy said winning Worlds would be a significant achievement for the organization and the LPL as a whole.

“I think for everyone’s expectations, I would hope that everyone would still want to see us make it all the way to the finals,” he said. “I think for a team of five Chinese players, it is still very meaningful for RNG to be in this position.”