Cloud9: The Underdogs of DreamHack Montreal 2018

Cloud9: The Underdogs of DreamHack Montreal 2018 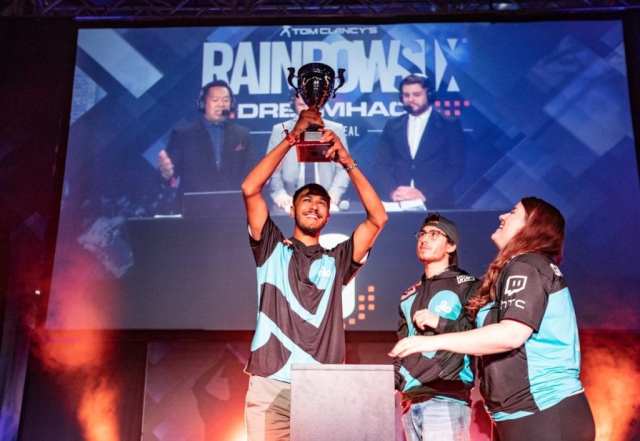 The Miracle in Montreal

The scoreline is 6-6, round 13 match point. In another overtime that Cloud9 has barely edged out, they need one more round to take the series. Their opponents Rogue, on the other hand, are fighting to push the series to another map. The map is clubhouse and the final bomb site is in bedroom. With perfect coordination, Cloud9 make a three-pronged push. Picks are found, the plant is going down, and all of the sudden the round is over. The five players clad in dark blue jump up from their seats, embracing each other in excitement.

In the biggest underdog story in Rainbow Six Siege history, Cloud9 has defied all odds to become the DreamHack Montreal 2018 champions. The team faced off against top North American team Rogue in the finals. There, they would take two games to finish out the series 2-0. In typical Cloud9 fashion, both matches were close with heart-stopping rounds. Throughout the week, Cloud9 has been pushing matches to overtime and this series was no exception.

This is a major accomplishment for the team that not so long ago was battling through Challenger League. With this victory, Cloud9 take a total $25,000 USD to the bank. As well, they become the second team seeded for the Six Invitational 2019 next year in February. Cloud9 have gone from a team that failed to qualify for the Paris Major to a dangerous North American force.

Coming into DreamHack Montreal 2018, the team consisted of:

Cloud9 have a storied path of being a polarizing team. The core of the roster initially formed under the organization Beastcoast during season 7 of the Challenger League. By making it into the season finals, the team would be seeded into the Pro League Relegation. There, they would heavily upset the experienced roster, Counter Logic Gaming. This win would qualify the group for a spot in season 8 of the Pro League. It would be then where Cloud9 would step into the Siege scene by acquiring the roster. By all accounts, the team’s future was poised for greatness.

However, the gauntlet did not stop after qualifying. Cloud9 had a rough first few weeks in the Pro League. They would repeatedly either tie games or go 0-6, which developed into a meme among the Siege community. In one instance, they would forfeit a match due to the fact that they were in Spain for DreamHack Valencia. Ironically enough, they failed to make it into playoffs at that tournament. At this point, the team and the organization received massive amounts of criticism. Fans were questioning their place as a North American Pro League team.

Almost like a miracle, a single roster change would transform the roster for the better. Former mousesports player Mark “MarkTheShark” Arismendez would join the ranks. Immediately, the team would see an improvement in performance. Cloud9 would finish out the first half of season 8 with three wins, catapulting them up in the rankings. Although the refreshed roster was yet to showcase their talent on LAN, they were considered a strong team. Chatting to some of the Noble and Spacestation Gaming players at Montreal, they commended Cloud9’s raw talent and clutch ability.

Group stages of the tournament would be a flurry of upsets. Teams that arguably should be in playoffs would drop their first match. Cloud9 was no exception here. They would go the distance against the new and aggressive Mock-it Esports lineup with 3-2 with two overtimes. From then, Cloud9 would follow a theme of back-and-forth close games. This trend continued into their playoff-qualifying match against North American juggernauts, Evil Geniuses. While not a heart-stopping series, Cloud9 would take the series 3-2, dropping the first map to the boys in blue.

6-1 LETS GOOO! @Retro1sg clutching it on Bank, going to Consulate For Map 3 vs @EvilGeniuses pic.twitter.com/wi8KZjdPwp

Speaking to Davide “FoxA” Bucci, he emphasized that they matched up well against their opponents. Describing the team’s style as “sporadic and loose,” he expressed confidence in their performance. Another point FoxA touched on was Evil Geniuses’ recent roster change. While he would describe the change as good, he felt that Evil Geniuses did not have enough time to prepare, whereas Cloud9’s roster has been stable for some time; they were here to prove themselves in a LAN setting.

Other notable upsets included Bootkamp Gaming taking a series from Noble esports as well as Spacestation Gaming beating SK Gaming. Despite the first-day upsets, the second day would see everything fall into place. Cloud9 surprisingly clinched the top seed of the playoff bracket and were preparing for an arguably easier side of the bracket.

A Marathon, not a Sprint

Due to the upsets in the first day of pool play, the lower bracket of playoffs ended up being stacked. Two tournament-winning contender teams (Evil Geniuses, Team Secret, and Rogue) would be eliminated before they even reached the finals. On paper, Rogue arguably had the harder playoff run. This wasn’t the case as Rogue would cruise through the bracket, easily taking series 2-0. Team Secret, a top-two European team, would not even make past the quarterfinals, dropping two close matches against SK Gaming. Rogue would immediately meet their regional rivals Evil Geniuses, in a rematch from the Paris Six Major. This time around, Rogue would prove to be the better team. Subsequently, they would defeat a warmed-up SK Gaming to earn their spot in the finals.

Cloud9, on the other hand, would continue their theme of fighting tooth and nail. Although their series with mousesports ended in a quick 2-0, the team would find themselves fighting for their lives against Millenium. The 2-0 series count does not do justice to what was an adrenaline-pumping matchup against the European team. The games would each stretch into overtime, with both of them ending with a 7-6 scoreline.

The stage was set. One of the best teams in North America versus one of the biggest underdogs in Siege history. No one would ever expect Cloud9 to take the main stage for the finals of DreamHack Montreal 2018.

Immediately, the first game on bank would start off with a back and forth. Cloud9 and Rogue would trade rounds, with both teams executing attacks and holds well. Most rounds seemed to rely on an individual player turning up and clutching for the round win. It wasn’t until round seven, where split decision making would force MarkTheShark to make a risky long run-out ensuing in chaos. Cloud9 would keep their composure and successfully defend against the havoc. They would roll with the momentum, taking the next three to close out the game.

The tone would be set in the fourth round where Retro would expertly play the clock to clutch the round. Showing why they’re a top-caliber team, Rogue would fight back despite the 1-4 deficit. They would bring the game all the way to overtime, 6-6 scoreline. Rogue had the defensive advantage going into round 13. But it was a coordinated three-pronged push executed correctly that decided the finals. Cloud9 found the early picks and played the man advantage perfectly. With the amount of control they had over the site, the defuser did not even need to be planted. The round was over in a flash. As fast as it was, Cloud9 were jumping to their feet and celebrating their accomplishment.

One of the final LANs in the year concluded with the most unlikely victors. Cloud9 are looking to ride that momentum from their win into the Pro League, which continues this month. DreamHack Montreal 2018 has proven that North America is in a transition period post-major. Will this mean that the throne is opening to new kings and queens like Cloud9? The next few months will answer that question, but for now, Cloud9 are the champions.

Check back with Daily Esports for all the latest Rainbow Six Siege news, roster updates, and esports reports.