C9 came correct as they won the series against EG convincingly 3-1. 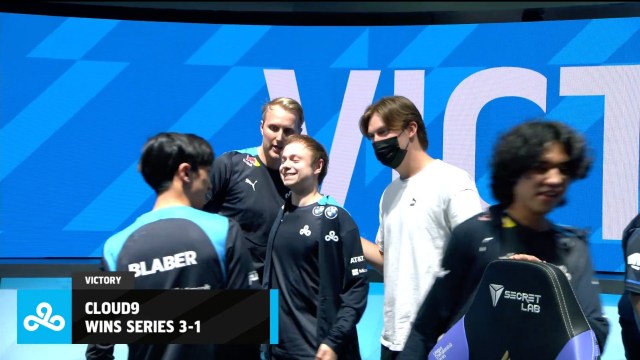 Screenshot via LCS Twitch C9 punch their ticket to Worlds 2022 with upset win over EG.

In a match between the reigning 2022 League of Legends Championship Series spring split champions and a team that just came off of an extremely close series against Counter Logic Gaming, it was Cloud9 that came out playing with confidence and it showed. Through clutch play and staying ahead in the draft department, C9 pulled off the upset to send EG to the losers bracket and send themselves to Worlds 2022.

The match that got Cloud9 into Worlds 2022

Game 1 draft didn’t appear to go as planned for EG. After first picking the ever-polarizing Yuumi, C9 answered by picking away Yuumi’s best partner Zeri. With Zeri off the table, EG locked in Sivir while C9 were the ones with the powerful Zeri botlane combo of Zeri and then Lulu. The Zeri Lulu combo proved to be lethal as C9’s bot laner Kim “Berserker” Min-cheol popped off on the pick going 7/0/3 as C9 shockingly claimed Game 1.

Game 2 saw EG attempt to bounce back by selecting Red Side, for reference in the Counter Logic Gaming versus Golden Guardians the team with blue side won every game in the five game slugfest. With EG letting C9 select first, EG still decided to prioritize Yuumi but instead of Zeri or Sivir, EG decided to bring out Ezreal. And while the pick worked alright in the mid to late game, C9 as.a team, led by a steller performance by Robert “Blaber” Huang on Wukong were able to again overwhelm EG to move onto match point.

Game 3 was a lot closer with no team managing to secure a significant advantage over the other. At the 30-minute mark, gold was practically even with EG having the powerful enchanter duo in the bot lane of Seraphine and Senna and C9 going with Zeri and Renata Glasc. Both strategies were on full display at a crucial team fight at Baron where EG’s insane healing kept the team alive in a long drawn out fight which allowed EG to secure Baron and start to grow their lead and with Dragon Soul theirs, C9 could not make a dent into the EG health bars as EG prevented the sweep to force Game 4.

Just like in Game 3, Game 4 was on a knife’s edge with both teams hovering Dragon in the late game with C9 on Dragon Soul point. With both teams dancing, Kacper “Inspired” Słoma blew his smite early and with the knowledge of EG’s dragon securing tool down, C9 hit the jets, took the dragon and with the power of Infernal Dragon Soul, took out EG to quickly grow a lead. And as soon as Elder Dragon was taken, C9 took the objective and the series 3-1.

Cloud9 are confirmed as the second #LCS representative at #Worlds2022 pic.twitter.com/srXpH1ngCN

EG has time to lick their wounds as they face off against TSM in the lower bracket.