Bye-Bye C9: The LCS champions are the first team eliminated from Worlds 2022

Bye-Bye C9: The LCS champions are the first team eliminated from Worlds 2022

Atleast they picked up a win before they were officially eliminated 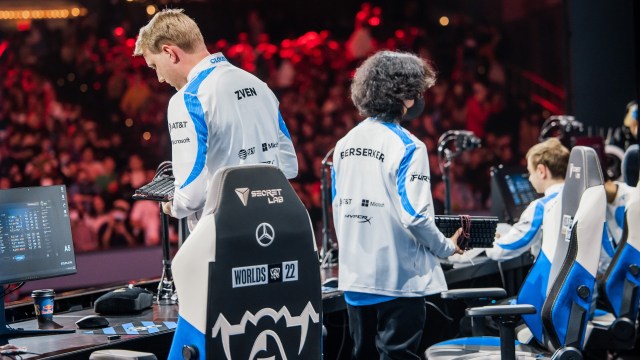 Provided by Riot Games/Getty Images/Colin Young-Wolff After their fourth loss of the group stage at Worlds 2022, C9 have officially been eliminated from knockout stage contention.

After a historically bad Week 1 for North America and the League Championship Series champions, even though Cloud9 looked better in Week 2, they have been the first team to be officially eliminated from the Worlds 2022 group stage after their loss against Edward Gaming. With a record of just 1-4, there are no ways C9 can qualify for the knockout stage as they would at least need three wins to force a tiebreaker. At max, they can only acquire two.

On the bright side, C9 didn’t go out winless. Despite the historically bad first week of the group stage, C9 did show signs of life in their first match against Fnatic. With their backs against a wall in a literal must-win match, C9 finally showed up and looked like the LCS champions as they dominated their match against Fnatic from start to finish giving NA their first win at Worlds 2022 and also gave fans hope that C9 would once again pull off a miracle Week 2 run to qualify for knockouts.

But unfortunately, their momentum didn’t carry over into their next game against the defending Worlds 2021 champions, Edward Gaming. From start to finish, EDG choked the life out of C9 with oppressive macro play and mechanical prowess. By the 19-minute mark EDG already had nearly a 10k gold lead. The game didn’t last much longer.

C9 had high expectations heading into Worlds 2022. Not only were they the League Championship Series one seed, but they also captured it with a dominating performance in the LCS playoffs. Outside of their 3-2 win in Round 1 against Counter Logic Gaming, C9 tore through the rest of North America as every other match wasn’t even close. They defeated Evil Geniuses 3-1 and then 100 Thieves twice with a 3-1 win in the upper bracket finals and then a 3-0 sweep in grand finals.

But during the first week and first half of the Worlds 2022 group stage, it could not have gone worse for C9. The team opened up their Worlds 2022 campaign with a loss to the League European Championship Series third-seed Fnatic and then followed it up with losses to T1 and Edward Gaming. None of the losses were particularly close in the first half of the round-robin. With the other three teams in their group going 2-1, they were forced in a rough position, go 3-0 or be eliminated from Worlds.

But it hasn’t just been C9 when it comes to NA’s woes at Worlds so far. The other two teams, EG and 100 have struggled just as much. They are in the same position C9 is in after both of those teams started Week 1 of the group stage at 0-3 as well. Both of those teams are in similar positions as they will both likely need to go 3-0 to advance. For now, C9 will be watching their NA brethren from the sidelines. C9 still has one more game left as they can still play spoiler against T1.