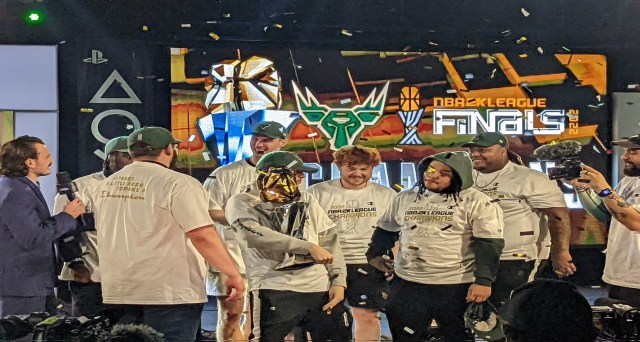 Bucks Gaming have won the 2022 NBA 2k League 5 v5 championship after taking down two time champions, Wizards District Gaming. The Milwaukee shocked everyone with a comeback win against Warriors Gaming to earn their spot in their first 5V5 finals.

After defeating the best offensive team in NBA 2K League, Bucks faced a different task in breaking down the best defensive team the next day. The massive challenge did not bother rookie player Michael “Cooks” Campbell who believed his team were equal to the task.

“When everybody asked me about this matchup, I told them we have a way better offence than they do,” Cooks said. “And we have the same defense if not better and that showed. They have a really good defense but our offensive firepower is just too much for them to hang with us in that game 4 and we just knew we had to lock in. Preparation was the big thing for us, we prepared hard for them and every other team in this playoffs.”

Coming into the NBA 2K 5V5 Championship, not many had them at the top of the list but they powered through. Bucks went through a rebulding, drafting two rookies and bringing in the veteran Artreyo “Dimez” Boyd alongside Jeremy Seese and Dawson”dawsix” Thomas.

“This is the first year that all of us have been together,” said Cook.  “We just completely changed the coaching in less than six months so it doesn’t feel real. I still can’t believe we won a championship; with a rookie backcore, a power-forward who was on the worst team in the 2k league and a center we traded for less than three months ago.”

From first pick in NBA 2K League history to finals MVP, 4 years in the making for Dimez

“It feels surreal to be honest, it really has not me hit yet,” said finals MVP Dimez. “It feels amazing. We worked really hard from management on down, to myself, my teammates.”

Dimez had been in the NBA 2K League since its inception and was the first overall pick in 2018. He got traded from Mavs Gaming to Raptors but finally found his home with the Bucks team this year. The player thanked every single one of his teammates on stage after the win for their part in their historic victory.

From #1 overall pick to 2KL Champion!@DatBoyDimez is the MVP of the 2022 NBA 2KL Finals🏆 pic.twitter.com/VqVTBCQIk3

Bucks set the tempo for the series with a relenting offense in Game 1 that saw them earn a 6 point lead in the first quarter. They closed out the first game with a 13 point difference and took the momentum to the next game.

Furthermore, Game 2 started off well for Wizards who enjoyed a good offense spell in the first quarter. They continued to keep the game close but fell short in the last quarter and Bucks gradually created a 10 point lead to end the game in their favor.

Game 3 was a do or die moment for the two time champions as they needed to stop Bucks from a cleansweep victory. Bucks started the game with a four point lead in the first quarter and seemed set to take the game. However, Wizards came roaring back with an incredible performance from their rookie point guard Justin “Kapp” Kaplan. Their performance was enough to force the first over time in NBA 2K finals history with the scores tied at 52.

With their season on the line, Wizards came into over time looking like an entirely different team. They quickly wrapped things up in overtime with  a  5 point lead to force Game 4.

Bucks take it all in Game 4

After failing to close out the finals in Game 3, Bucks came out with even more fire power;  and played one of their best quarters ever.

“I knew we were going to win and we were not going to game 5,” said Cooks. “My team told after game 3, Cooks doesn’t have two bad games in a row.”

They shut out Wizards and went up 22 to 8 in the first quarter with big blocks and turn overs from all players.  Although Wizards were unwilling to go out quietly and clawed their way back in the third quarter, it was not enough to keep the Bucks from claiming their first NBA 2K championship win.