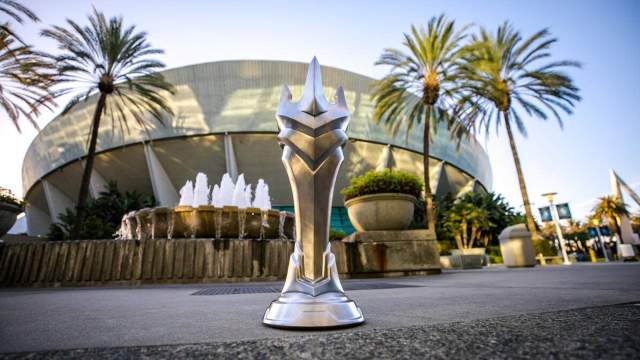 Provided by Activision-Blizzard. The Overwatch League championship trophy in front of the Anaheim Convention Center.

On Day 4 of the Overwatch League 2022 season playoffs, the Dallas Fuel and Houston Outlaws won their matches to secure a Battle for Texas in the upper bracket final. In the lower bracket, the Hangzhou Spark continued their underdog run while the San Francisco Shock stayed alive.

The two teams that ended their tournaments were the Los Angeles Gladiators and Florida Mayhem, finishing in the 7th-8th spot. This means that all the teams left are officially in the top six for the season playoffs.

Yeehaw! We're getting another Battle for Texas ON LAN 🤠

The @Outlaws bring the Spitfire to heel and move on to face the Fuel in Winner's Finals!#AnteUp | #OWLGrandFinals pic.twitter.com/Eu9Si2VlPk

After getting sent down in a five-map thriller to the Houston Outlaws, the Shock were looking for blood. The team in their way were the Los Angeles Gladiators, a formidable foe in the 2022 season. However, this time around, the Gladiators couldn’t manage the same playoff runs as they did earlier in the season. With Kim “Proper” Dong-hyun having yet another amazing performance to help lead his team, the Shock dealt with the Gladiators, beating them 3-1.

This marks the end of the Los Angeles Gladiators 2022 season, one that started very strong but waned as the stages went on. A very successful season nonetheless.

As for the other lower bracket match of the day, the Hangzhou Spark beat the Florida Mayhem 3-1. This match was yet another step on the great underdog run of the Spark, coming into this tournament as the bottom seed. They proved their worth, and remain in the hunt.

Unbelievable series for @Hangzhou_Spark, so crushing to see @FLMayhem go out like this – such a quality team. Sick game!

As for the Florida Mayhem, their 2022 season is now over. Considering expectations for them were low heading into 2022, they managed a lot of successful tournament runs and found some hidden gems over the previous off-season.

With the first upper bracket game of the day, the Dallas Fuel faced off against the Seoul Dynasty. Both teams came into the competition as top contenders for the title, but one clearly came out on top over the other. In a 3-0 sweep, the Dallas Fuel showed off what they’re best at: team coordination and coaching. On top of all the immense talent that Fuel roster is, the team clearly saw this as a Grand Finals preview and took it with that level of seriousness.

With the current meta of Winston, Sojourn, Reaper, Kiriko and Lucio, cohesion is key to make sure your team gets the most value out of all your ultimates. That was where recent Role Star Kwon “Fielder” Joon on Kiriko shined alongside Kim “SP9RK1E” Yeong-han. Plus, despite his shortened playing time over the year, Lee “Fearless” Eui-Seok came back into the starting lineup and didn’t skip a beat facing off against Role Star Yoo “smurf” Myeong-hwan on Seoul. Dallas sent Seoul to the lower bracket, where they would face off against the San Francisco Shock next.

Houston sweep London to secure another Battle for Texas

The other upper bracket match was the Houston Outlaws versus London Spitfire. Both teams had upset victories to get to this point, sending the Shock and Gladiators into the lower bracket. Nobody knew exactly what to expect, but the team that showed up were the Outlaws.

With Choi “MER1T” Tae-min’s Sojourn leading the way, the Houston Outlaws beat the London Spitfire handily. Especially after beating the Los Angeles Gladiators, fans expected a closer matchup between these two teams. What they got was the London Spitfire quickly being sent to the lower bracket, set to face off against the Hangzhou Spark.

That was Day 4 of the Overwatch League 2022 playoffs in a nutshell, as well as the final day without a crowd. Now, the top six teams will face off in front of a live crowd to see who wins it all.