A Korean superteam is formed in Boston 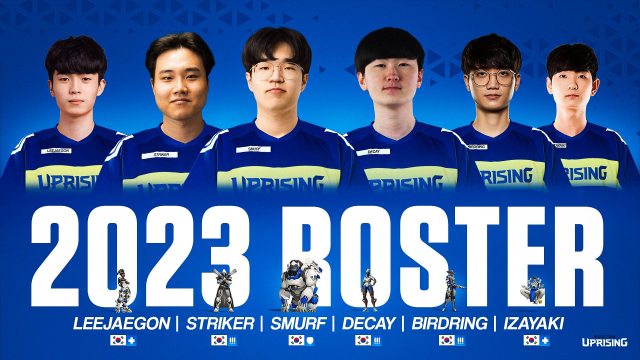 The Boston Uprising have revealed their entire roster for the Overwatch League 2023 season, going fully Korean with some big names. Notably, Kwon “Striker” Nam-joo returns again in an attempt to lead Boston to the title.

On Twitter, Boston Uprising called them a “team of warriors” that aim to prove why Boston is called the city of champions. Here’s what to expect going into the 2023 season.

Stars. Leaders. Heroes. The @bostonuprising are proud to present our 2023 roster.

A team of warriors with one goal in mind: showing the fans why they call Boston the city of champions.
#BostonUp

Here is the full Boston Uprising roster for 2023:

The Boston Uprising have gone crazy this 2023 off-season, signing some of the top free agents available.

To start, we have smurf, a 2022 Role Star for the Seoul Dynasty and one of the most flexible tanks in the world. Then, we have the DPS trio of birdring, fresh off returning from retirement, Decay, the leader of the Washington Justice, and finally Striker with his third time at Boston. Then, we have the former Shanghai Dragons backline of LeeJaeGon and IZaYaKI. Despite not the best time in 2022, both of them still have proven to be one of the best support duos in the league.

With this big 2023 off-season, the Boston Uprising and their new staff of manager Aaron “PRE” Heckman and new head coach Shin “Dongsu” Dong-soo will have to lead this team to a more successful season than in recent years. While the team looks great on paper, they’ll need to work well to compete in a 2023 season. Especially since a lot of teams will have large roster turnover.

In the end, we’ll have to wait and see how the new Uprising does with their Korean superteam.