Biggest TFT streamer k3Soju has qualified for the world championship

Biggest TFT streamer k3Soju has qualified for the world championship

Rainplosion, Amde, and Kyivix join Soju as the other NA reps 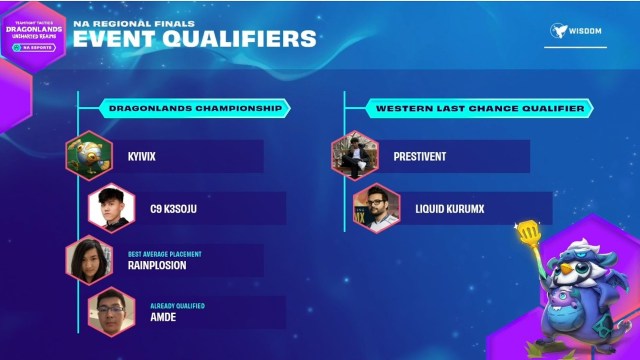 Provided by Riot Games Soju, Amde, Kyivix and Rainplosion are heading to the TFT Dragonlands Championship

Cloud9’s Michael “k3Soju” Zhang has been playing Teamfight Tactics at a high level ever since the PBE. Not once has he qualified for the TFT world championship, however. Despite being the game’s most popular streamer, Soju has never reached the game’s absolute peak of competition — until this weekend.

Coming down to the very last game of the TFT Dragonlands North American regional finals, Soju found himself in unfamiliar territory, ironic for one of the stalwarts of the game. In seasons past, Soju has qualified for the last tournament of the season in the NA region before but has rarely made it to the final day. He did so once before but by the middle of the series, he was already eliminated from contention. But Sunday was different.

I MADE IT TO FUCKING WORLDS

Soju actually jumped out to an early lead on the day and was in a good position to qualify. But after a hiccup in Game 3 and 4 of the six-game series, Soju started to see his chances fade away. However, with an outside chance in Game 6, Soju capitalized on a favorable situation and did just enough to force his way into a three-way tie for the second seed at the TFT Dragonlands Championship. Soju beat the other two on tiebreakers to secure his spot.  In front of 30,000 viewers on his personal Twitch stream, Soju finally pushed into the world championship for the very first time.

Top 3 every single day, @kentwuhoo baited me with lilia reroll, @Mortdog refused to hand out items, BUT WE STILL MADE IT :DDDDDDDDDDDDDDDD pic.twitter.com/huC3OLC2MJ

“Kyivix” chose the best weekend to play his best ever TFT as he owned competition on all three days. With an average game placement of less than third, Kyivix got to take a victory lap during Game 6 as he was guaranteed a spot. As the players fell, that spot ended up being the NA Champion as he enters Worlds as NA’s flag holder.

Lineup for Western LCQ of @TFT is now locked in!🏆

Good luck to all players, 2 spots up for grabs for Worlds!🌎

Like Kyivix, “Rainplosion” also had her spot virtually locked up heading into Game 6 and in the end she qualified as the third seed taking the “best average placement” spot after losing a tiebreaker for the points spot over Soju. Rainplosion becomes the first trans player in TFT history to qualify for a TFT world championship after her incredible display of skill over the course of the Dragonlands expansion.

The three players join “Amde,” who qualified earlier in the year by winning the Mid-Set Finale, as the four NA reps at worlds. But two more spots are potentially up for grabs at the Western Last Chance Qualifier as two players from Latin America, Brazil, Europe and NA will fight for the finals slots. The NA reps at that event will be Kevin “Prestivent” Zou and Team Liquid’s Alex “Kurumx” Tompkins.