Get the most out of your attachments 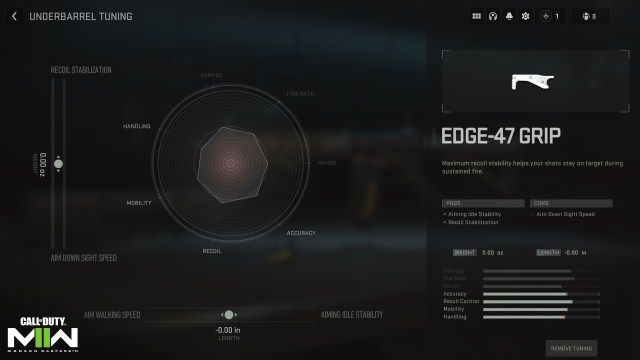 One of the more exciting new features to come with Call of Duty: Warzone 2 and Modern Warfare 2 is attachment tuning. This small, but incredibly useful mechanic allows players to further customize their weapons in the Gunsmith. Once players have fully ranked up a gun, they gain access to attachment tuning, which lets them adjust each attachment across four different stats. Each attachment has different customization options so players always have several options to make their gun how they want. There has been some controversy around the attachment tuning thus far, though, as sometimes it feels like the more you tune a stat on an attachment, the worse it gets in that stat.

In order to fix this, Warzone 2 and Modern Warfare 2 community members have discovered that there’s a “sweet spot” when you tune attachments. Essentially, this requires players to not tune an attachment all the way, but instead find the spot on the tuning graph that gives the best possible stats. Recently, one content creator, KRNG XVI, posted a guide on how to find an attachment’s sweet spot with ease.

KRNG XVI discovered an extremely simple method to find the best way to tune attachments in Warzone 2 and MW2. While this method doesn’t precisely find an attachment’s sweet spot, it gets close enough to where players won’t notice the difference. The exact method is listed below:

SIMPLIFIED TUNING METHOD: Easiest way to automatically find the BEST tune for any attachment on any gun in 3 seconds.

Just apply the easy universal trick! This is perfect for people that find Tuning to be too confusing / too much work.

KRNG XVI provides a more in-depth look at this process on Reddit and their Twitter. If players follow this simple method, they shouldn’t have to worry about tuning their attachments again.