Best League of Legends players in 2022

Best League of Legends players in 2022 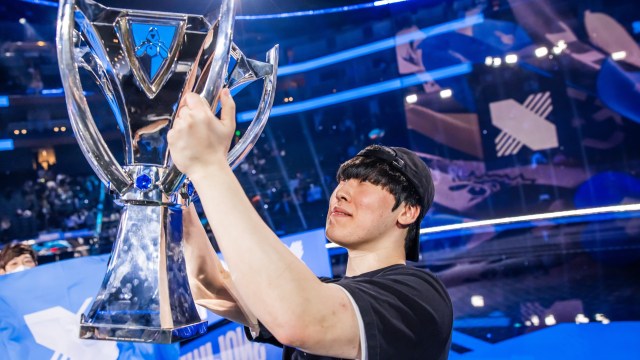 Photo by Colin Yung-Wolff/Riot Games Zeka hoisted the Summoners Cup in his first ever Worlds appearance.

2022 was a year to remember in competitive League of Legends with new champions, new teams and of course, new players taking over the game. When looking at the new guard who rose up to prominence in 2022, the skill level in League of Legends just keeps climbing and with an exciting future ahead for the world’s top esport, Upcomer takes a look at the five best League of Legends Players from 2022.

Kim “Zeka” Geon-woo was a no-name heading into 2022 and was still on no one’s radar heading into Worlds 2022. Until his incredible breakout tournament, Zeka had no accolades in his young career and he was on the verge of not making it to Worlds 2022 altogether. But once he got in, the rest was history.

Zeka outdueled some of the best mid laners of all time on his way to a League of Legends world championship taking down Worlds 2021 Finals MVP, Lee “Scout” Ye-chan, the number one mid laner in the world Jeong “Chovy” Ji-hoon and the GOAT of League of Legends himself Lee “Faker” Sang-hyeok all in succession.

The 2022 League of Legends Champions Korea spring split was legendary for the T1 organization as not only did they pull off the first undefeated split in LCK history, but they also had the first-ever Support player winning Most Valuable Player. Ryu “Keria” Min-seok was the backbone that allowed T1 to reach new heights in 2022 and showcased his talents throughout 2022 both in the region and out.

Like Keria, T1 would not be where they were in 2022 without their superstar rookie top laner Choi “Zeus” Woo-je. T1 took a gamble in the offseason after reaching the semi-finals of Worlds 2021 with their young roster but they believed they had a better top laner waiting in the wings than the one that helped them reach the top four in 2021 and with that trust, Zeus was promoted to the main roster.

And with all eyes on him, Zeus proved many times over that the decision to bring him up to the big stage was worth it, Zeus was one of the best players in the world during his rookie year and was the best top laner in his region by far.

China’s premier League of Legends League took a step back in 2022 after winning Worlds 2021 but the players in the region were still good enough to be in the conversation of the world’s best. One of those players was JD Gaming’s top laner, Bai “369” Jia-Hao who was the best top laner in the LPL in the 2022 LPL summer split and proved that he is one of the best top laners in the world at Worlds 2022 going toe-to-toe against Zeus for that honor.

The bot laner position was absolutely stacked worldwide in 2022 with heavy hitters in every major region but the player that displayed excellence the most in 2022 was Gen.G’s bot laner Park “Ruler” Jae-hyuk. Taking home the 2022 LCK Summer split MVP, Ruler was the best player in the best region in the back half of 2022 and while his team came up a bit short at Worlds 2022, Ruler himself had a fantastic tournament and is heading into 2022 still at the top of the bot laner power rankings.