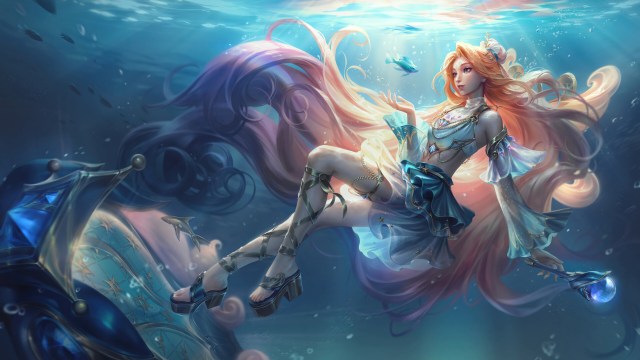 Although everyone is fighting for ranks in the standard ranked mode for Teamfight Tactics, players can also earn cool rewards and fight for rank and pride in Hyper Roll too. Here are the top TFT Hyper Roll comps, based on API data from MetaTFT.com, as well as basic descriptions of the comps and why they are good in TFT Set 7.5, also known as TFT Dragonlands: Uncharted Realms.

The comp that wins the most often in Hyper Roll isn’t Dragons; it’s Mystic Seraphine with Graves as the main carry. That’s because in a meta where spending gold in the early and mid-game is king, being able to play a comp that spikes hard in the mid-game with the ability to be strong up to that point is valuable. This comp is a little different from the Mystic Graves comp in the standard mode and indexes more into the Lagoon trait.

Don’t get it twisted; if players can still pivot to Dragons in the end game, it’s still by far the strongest board. The issue here is that with many games ending so quickly, it’s very hard to hit this board by the time you even get a chance to buy the legendary units. But with a strong early game of playing something else, it’s still possible.

The default comp everyone plays in Hyper Roll; Straight Lagoon with only a single non-Lagoon unit in the final version of the comp. Spending gold early to make Malphite and Taliyah three-star is enough to stabilize in the early game and make Sohm and Nilah threats in the late game. Essentially, this comp specializes at hitting hard early and watching everyone bleed out late.

Guild Xayah is one of the most played comps in the standard mode, and is good in Hyper Roll too, albeit with several changes to the comp. The first is that it goes heavy into the Swiftshot trait to maximize early power and the second is that it elects to play Zippy instead of Shyvana. That’s because players won’t be able to spike hard without Shyvana and in this mode, spiking late isn’t a real option unless you’re going all in. Instead, this comp elects to three-star Ezreal and Sejuani early to be as strong as possible until Xayah is picked up.

Astral is a very popular comp in Hyper Roll — in fact, it’s the most popular by a wide margin. The comp is very simple; buy all the Astral units you can find in the shop and use Aurelion Sol to carry late. For players wanting to use Astral to its full advantage then pivot to another comp for late game, players can elect to drop the weak Astral units for Dragons.