Best destroy decks for all pools in Marvel Snap

Best destroy decks for all pools in Marvel Snap

Three quick destroy decklists for each Pool in Marvel Snap 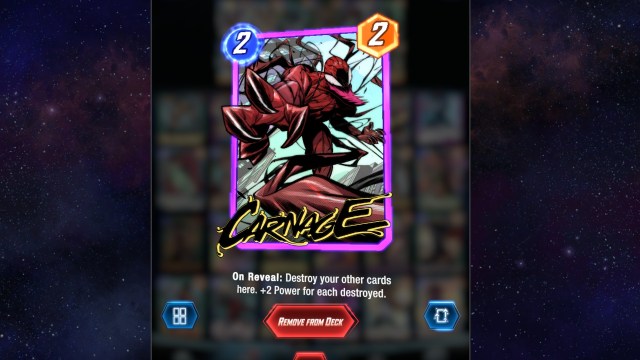 With Marvel Snap bringing fans into the game by letting them live out their superhero fantasies, some players may gravitate toward the villains. With the sheer amount of destroy effects tied to the bad guys, it definitely feels good to be bad. Here are the best destroy decks for Pool 1, Pool 2 and Pool 3 in Marvel Snap.

This deck is actually playable in some form in Pool 1 which is thanks to the three-card core of Carnage, Nova, and Deathlock — which are so good they are played beyond Pool 1. The rest of the deck is actually more movement focused with cards like Multiple Man, Doctor Strange, and Iron First. The primary strategy revolves around moving Multiple Man around to give Carnage and Deathlock value while still having late-game power.

At this point, the deck is not only playable, it’s meta competent. With potent mid-game tools, this game can put opponents in very dire situations. Since the core isn’t too big, there are many tech options in the Pool 2 variant — but two of the best are Shang-Chi and Hobgoblin which can guarantee lane wins on the last turn of the game.

And then there is Pool 3. With the sheer amount of power cards, the Pool 3 variant of the destroy deck is one of the best decks in the entire game.

With the addition of Deadpool, The Hood, and — of course — Death, the “Deathpool” deck has the arguable best Turn 6 in the entire game, with the ability to drop multiple 10-power plus cards thanks to Deadpool, Death, and Taskmaster. Deadpool on death adds a copy to your hand with double power, Death reduces her cost by one each time a card dies, and Taskmaster’s power on reveal is equal to the last card played.