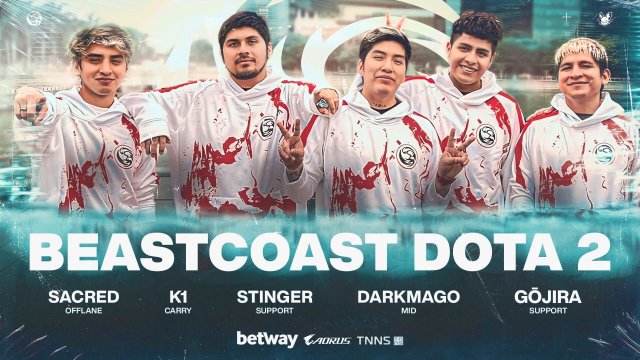 The roster changes in the South American Dota Pro Circuit (DPC) continue as Beast Coast is the first to announce its new roster officially. Beast Coast will add Gonzalo “Darkmago” Herrera and Rafael “Sacred” Yonatan to join their new team from Thunder Awaken.

The Beast Coast lineup that stayed together for two years is no more, as the organization makes the first changes to the squad since 2019. The core of the group will remain the same, with Héctor “K1” Antonio Rodríguez Asto,  Steven “Stinger” Vargas Mamani, and Elvis “Gojira” Joel De la Cruz Peña. Now the Dota 2 squad will add two new players from Thunder Awaken, DarkMago and Sacred.

The South American region of the DPC has been on the rise and this year’s International made it clear that there are strong teams in the region. Thunder Awaken ended their run at 6th after making it into the upper bracket. The team was able to defeat North American favorites Evil Geniuses, who topped their group, before losing to Team Secret and then Team Liquid in one of the best games that Dota has ever seen. Beast Coast eliminated Evil Geniuses in the lower bracket to show that the south side of the Americas was superior this season. Beast Coast also secured at least the top two spot in every tour of the South American DPC, even winning the first-ever regional final in February 2022.

“I’m really excited to play this season,” Stinger said. “I have a lot of faith and trust in this team. I believe our discipline will set us apart from other teams.”

In addition to the new roster, the team has also announced that Stinger will take a leadership position on this new team.

“In addition to the new signings, we’re happy to reaffirm Stinger as our team captain. Stinger has been drafting for us since the beginning and has been a fantastic leader, so this was an easy decision to make,” said Beast Coast General Manager Colin Bashor.

As the team finalizes its roster, the rest of South America will do the same. The rumored Evil Geniuses roster will be a fun addition to the region.