'Arcane' Episode 3 review: Everybody wants to be my enemy -

‘Arcane’ Episode 3 review: Everybody wants to be my enemy 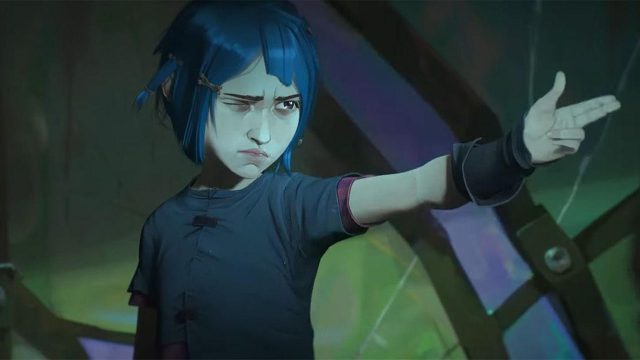 Disclaimer: In this “Arcane” review series, I’ll be diving into every single episode of the show and dissecting themes, critiquing style and fanboying over every single League of Legends cameo. I want to avoid being overly explicit whenever I can, but obviously, some spoilers lie ahead for Episode 3 of “Arcane.”

“Arcane” Episode 3 was the heart-wrenching finale to the Netflix exclusive animated series’ first act. Its fight scenes (there are plenty of them) are all tragic in their own way and the consequences that play out aren’t all in the name of retribution. Most of the things you saw coming after Episode 2 are played out, and it still feels bad all the same.

In this review of “Arcane” Episode 3, titled “The Base Violence Necessary for Change,” I’ll touch on some of the most important recent developments heading into Act 2 and how Powder’s trauma and mental health are tackled in the show.

‘Arcane’ Episode 3 ties everything together

In my last review, I address how Riot had done a good job letting people into the world of “Arcane” in order to set up high stakes and give us a bit more of an understanding of the impact of everyone’s actions. Well, Riot, I’m politely asking you to take it back because I’ve officially seen too much. Tell me right now if the rest of “Arcane” is going to be like this because I don’t know how much more devastation I can take.

First, some housekeeping. Jayce’s trial ends with him getting expelled from the academy, but in return, he gains a partner to support his Hextech dream in Viktor, who also tried to stop Jayce from ending his life.

Back in The Lanes, Marcus’ deal with Silco takes a gross turn when Vander turns himself in (to protect Vi, who was prepared to do the same) and gets ambushed by Silco and one of his juiced-up thugs. Vander’s friend Benzo is killed and Vander gets dragged away to Silco’s lab after taking a major beating. All of this happens while Vi and Ekko watch helplessly.

“Arcane” Episode 3 is a nonstop ride but doesn’t leave viewers in the dust. It opens with a scene that gives us a bit more insight into Vander and Silco’s relationship, which right now seems to just be that they were once fighting to the death. Silco lost and was left to struggle for his life while drowning. We still don’t know how exactly the two know each other, but it makes a hell of a lot more sense why Silco would be motivated to jump him.

Back in Topside, Jayce and Viktor have begun their partnership and are working to turn their Hextech dream into a reality; they want to bring magic into the hands of the people and help make the world a better place. Well, Viktor says that, and Jayce agrees. But nevertheless, after a bit of fanservice for Vayce shippers, they break into Heimerdinger’s lab and end up having a major breakthrough in their research.

The rest of “Arcane” Episode 3 centers around Vi, Powder, Mylo and Claggor’s attempt to rescue Vander from Silco’s clutches. This is where things get dark, but as I watched, I thought I was prepared for whatever they could throw my way. In the end, I was way wrong; I was not prepared. I was not prepared at all.

It’s time to talk about “the incident.”

When the gang decides on their plan to rescue Vander, they’ve also made the decision to put their lives on the line. In order to buy time for Mylo to open Vander’s shackles and Claggor to figure out their exit strategy, a very young Vi takes on a handful of massive henchmen using Vander’s cast iron gauntlets. This scene was really badass, but I still don’t think Vi a young teenager could take that many people twice her size, one after the other. She eventually loses to the juiced-up guy (you know, the one from before) and Vander makes his dramatic entrance after being freed.

Basically, Vander takes care of the purple guy, confronts Silco and they have an epic standoff before Silco stabs Vander. Even in what should’ve been his final breaths, Vander maintains a chokehold on Silco out of desperation to take him down with him. He falls into a pile of the same potion that’s been turning people into muscular freaks.

This is where Powder, who was told by Vi to sit this dangerous heist out, takes control of the narrative. It’s been made pretty clear since early in the show, and for those familiar with League of Legends, that Powder has issues with her mental health that are possibly fueled by her abandonment issues and anxious attachment toward Vi.

We don’t catch many glimpses of it before “Arcane” Episode 3, but she shows some symptoms of psychosis during the bedroom scene: talking to herself, jarring hallucinations and intense agitation manifested through physical destructiveness. I was wondering how Riot would tackle Powder’s mental health and impending descent and, without going into unnecessary detail, I think the attention to detail of this scene did it justice. From carefully animated snot bubbles and slobber to the violent hair-pulling, “Arcane” Episode 3 presents the state of Powder’s wellbeing in a “real” way that sets viewers up well for the big incident and the aftermath of it all.

When Powder goes against Vi’s wishes and shows up to the scene, she intends to help using the power of the blue crystals we’ve seen cause so much destruction throughout the show. Unfortunately, using that unstable power in her explosive gadgets ultimately comes at the cost of Mylo, Claggor and Vander‘s lives.

The whole time, Powder is excited to have been able to contribute, but when she finally reunites with a grieving and injured Vi, reality sets in. Powder’s horror at the scene created by her own actions is quickly trumped by the fear and frustration felt at Vi’s angry and hateful reaction. “You did this?” Vi says. Then the two separate, never getting to see each other again after Powder is found and taken in by Silco and Vi is intercepted by Marcus on her way back to her sister.

“Arcane” Episode 3 lands well and serves as an impactful end to Act 1. It makes sense that Powder would be taken under Silco’s wing, and while this episode laid the action on thick, it was all tasteful and added to a satisfying buildup and conclusion. Act 2 is out now, and who knows where it will take the next chapter of “Arcane’s” story.