'Arcane' Episode 1: Vi understands the weight of being an older sibling

‘Arcane’ Episode 1: Vi understands the weight of being an older sibling

Vi takes her job as an older sister seriously, and it shows 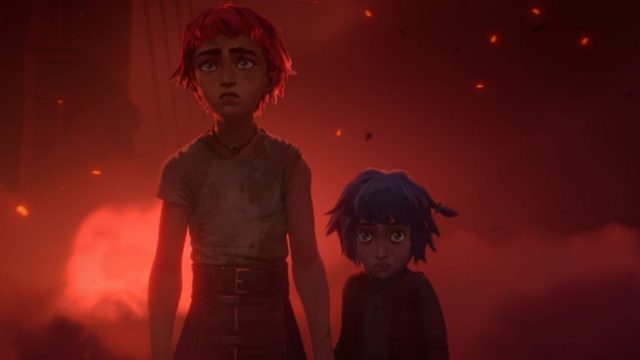 Provided by Riot Games/Netflix "Arcane" focuses its story around siblings Vi and Powder.

Disclaimer: In this “Arcane” review series, I’ll be diving into every single episode of the show and dissecting themes, critiquing style and fanboying over every single League of Legends cameo. I want to avoid being overly explicit whenever I can, but obviously, spoilers lie ahead for Episode 1 of “Arcane.”

Riot Games’ “Arcane” is the gift longtime League of Legends fans have been waiting years to receive. From Studio Fortiche’s delicate and caring animation job, to the intimate dialogue and writing throughout, so far “Arcane” has greatly exceeded my expectations as a League fan of 10 years. There’s a reason it’s topped multiple charts in its debut.

Episode 1 of “Arcane,” aptly named “Welcome to the Playground,” throws viewers into the action from its first frame, and doesn’t shy away from using complex family dynamics and even trauma as backdrops to its fast-paced story.

Any viewer will notice the attention to detail present in “Arcane” right away. In this review, we’ll be looking at those details through the lens of certain artistic choices made in the show and how they play into the relationship between its two main characters, Vi and Powder, so far.

If you have an older sibling, the show’s two opening scenes will cut deep.

Our two protagonists, sisters Vi and Powder, navigate a war-torn district of Piltover devastated and afraid before running into a hulking, brutish silhouette who’s later revealed to be the kind and loving father figure to the two, Vander.

The whole time, Powder is covering her eyes and being led by Vi as she sheepishly sings to herself to distract from the devastating scene. Powder is afraid, but comforted enough by her big sister’s presence that she’s able to hold back her tears for a bit. Eventually, the horrifying sight of lifeless bodies and flaming buildings causes Vi herself to break down, which is her sister’s queue to follow suit.

That single scene sums up their relationship nicely. Vi doesn’t put on a tough act for her kid sister; she is tough, but she’s also still a kid herself. In that moment, she spent the last bit of mental fortitude she could muster to be strong for Powder and shield her from a sight that, honestly, no child should ever be exposed to.

Immediately after the opening scene, the show cuts to a few years in the future. Vi, who seems to be in her early adolescence, and Powder, a curious preteen, are now accompanied by friends Milo and Claggor. Vi’s older, wiser and stronger, and this episode does a fantastic job showing us the more impactful ways in which she’s now able to protect Powder. Vi doesn’t view Powder as a burden, rather, she actively finds ways to bring her along for the ride and empowers her to protect herself, too, as shown by her collection of semi-operational gadgets and witty retorts to Milo’s insults.

They’re poor orphans living in the underbelly of a society built on casting people like them to the side. In The Underground, community is everything; for Vi and Powder, it’s all they have. From showing her the beautiful view of Topside to encouraging her hobbies and interests, Vi almost refuses to let Powder ever feel unloved or isolated. She doesn’t always get it right, like when she tells Powder to run with stolen goods, but that’s where her intention lies.

The rest of the episode follows a breaking-and-entering job botched by Powder’s carelessness and the aftermath of it all. This is where their dynamic really shines through.

Vi, Claggor and Milo get into a dangerous (and graphically depicted) scuffle after being confronted by a couple of goons on their way home with their fresh haul. After they finally make it home and receive a massive scolding from Vander, Vi gets an extra lecture from Vander explaining that as the oldest of the four, and Powder’s big sister, she needs to consider the true impact of her decisions as a role model.

Vi’s role as an older sister is contextualized nicely in the episode by the choices she makes when it comes to Powder. Even though they climbed a building in order to break into a house, Vi stops, looks at Powder and tells her to look at the view. In the scene where she’s waiting for Powder to jump after the rest of the gang has already taken the plunge, she encourages her in what might be my favorite interaction in the episode:

“Powder look at me. What did I tell you?” Vi asks Powder.

And she jumps. People with siblings know the feeling of having to drag them around everywhere, or worse, being the one that always gets left behind. Rather than show visible frustration at Powder’s fear and hesitation, she cheered her on by reminding her of why she shouldn’t let those feelings stop her.

Vi does understand the responsibility she carries simply by being older than Powder, and she’s still learning, too. When Milo complains to Vi about Powder’s proneness to mistakes, questioning her readiness to hang with the rest of the group, Vi doesn’t get swept up in his noise. She won’t stand idly as he insults Powder, a child, for being exactly that. Instead, she turns the tables on him and sets him straight, telling him to worry about himself instead of what he perceives as a problem brought about by someone else.

Episode 1 of “Arcane” showed viewers the love between the two siblings, and that Vi wants Powder to be able to grow up and live life with as much confidence and pride as she does. That’s why the episode’s last scene hits so hard. Vi reveals to Powder her intentions to one day rise up and fight back against the stuck-up socialites that eat their fill while they, and many others down below, struggle to get a bite themselves. She let’s her in on this dream because she wants Powder’s help achieving it; because she can help. And it’s important Powder to know that.

The first episode did a great job setting viewers up for what we can only suspect to be an emotional rollercoaster by showcasing how seriously Vi takes her role as a big sister to Powder. I truly hope the rest of the show is able to develop this theme of sisterhood throughout and draw parallels between other characters as well, but so far, “Arcane” has knocked it out of the park with its first episode.