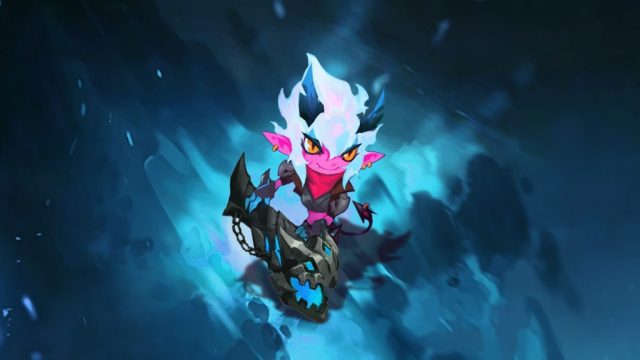 In the latest League of Legends Nexus post, Riot Games gave us an early look at the model for Little Demon Tristana. The team working on the skin went into detail on how the model for the community-chosen skin is made. Let’s take a look at what it takes to bring the second Little Demon to life!

Trevor “EdBighead245″ Carr, a senior character artist at Riot, went into detail about what it took to create this model. He said that all champion or skin models are always based on the concept art. Furthermore, he adds that the art team works closely with the League of Legends modeling team to prevent possible mishaps. Those could include the 2D drawing not working in a 3D environment or the top-down camera angle causing problems.

Interestingly, Carr noted that the first model for Little Demon Trist used parts from other skins. Her head used the base skin’s face and Demon Vi’s horns and hair, while the body and gun belong to her Omega Squad skin. They even used the wings and tail from Little Devil Teemo!

Moving on, the character gets sculpted in 3D using a program called Zbrush. This helps the team view the skin from any angle they want. The model is made out of millions of polygons, which simulate a surface similar to clay. Carr also noted that a lot of inspiration was taken from Demon Vi’s early splash layouts, the reason being that some parts of Trist’s outfit just weren’t fleshed out. Eventually, the team agreed on the model and it could be taken to the next stage.

In the next stage, the modeling team had to optimize the sculpt to better fit the game engine. As a matter of fact, the model gets shrunk to just around 7,000 to 10,000 triangles. Once the low-poly model is complete, it moves to a technical artist.

Moonyoung “ANDMoonY” Oh, the League of Legends technical artist, explained his role in the skin creation process. He says the model is “still and lifeless, kind of like a doll” at the beginning of the process. His job is to add bones, joints, and controls to the model and bring it to life. The process is called rigging and allows the animator to create the skin’s movements. To add up to it, Oh also explained how all the rigs are made.

The rigs are made of components, which he compared to blueprints that resemble body parts. In addition, he also said that the technical artists later use these blueprints to bring the rig together, telling it where to attach each body part. While most of these components are reusable, there are situations where they have to make new, unique components. This happened with the Little Devil Teemo skin, where Riot had to make a special tail component. After a few adjustments, his tail could be used with Trist, saving a lot of time as opposed to developing a new one.

With this phase complete, the skin is finally ready to move onto the animation team.

For more League of Legends and esports news, keep in touch with Daily Esports!