The latest battle pass has some new skins to acquire 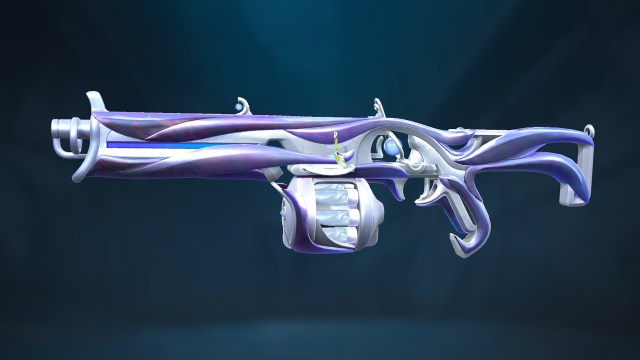 Act 3 of Episode 5 brings another new battle pass with plenty of new cosmetic items to VALORANT, and here is a rundown of all the items within. Some of the main highlights include the Iridian Thorn skins, Starlit Odyssey skins and Rune Stone skins. Plus, as is tradition, an Iridian Thorn knife skin waits for you at the last tier of the battle pass.

To start, as is normal for battle passes, there are some rewards you can get for free. For Episode 5 Act 3’s battle pass, you can earn cosmetics such as the Corbin’s Light gun buddy, Starlit Odyssey Ghost weapon skin and some Radianite Points for weapon customization.

But, to get all the rest of the cosmetics available, you need to purchase the battle pass. That costs 1000 Valorant points, which you can buy in-game for around $10. This puts you on the track to get every time along the way. Plus, purchasing the battle pass after already passing the premium tiers unlocks everything up to that point.

As for those items, as mentioned earlier, the skins revolve around three specific themes. For the Iridian Thorn skins, a Judge is available early on in the pass, a Sheriff at tier 16, a player card at tier 29, a Bucky at tier 30, an Operator at tier 45, a gun buddy at tier 47 and a knife at tier 50.

In between, you have items such as a white flag spray, the Harbor ID player card, and some more Radianite points. Asides from more unique sprays and player cards, that covers the Episode 5 Act 3 VALORANT battle pass.

Looking for free items to use in-game? See the list of all active Valorant Redeem Codes on Gamer Journalist.