All Series 4 cards in Marvel Snap

All Series 4 cards in Marvel Snap

These cards are super rare but also super good 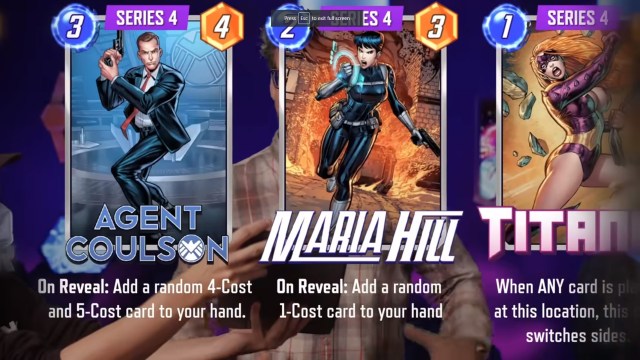 Up until very recently in Marvel Snap, cards in the game were separated into three different Series or Pools which was controversial for a couple of reasons. With the primary way to acquire new cards being the collection level in the game, players essentially earned cards semi-randomly meaning that cards showed up in random order but only up until they collected all the cards in a specific pool.

Players would need to collect all the Pool 1 cards before being able to collect any cards in Pool 2 in which the cycle would begin again of collecting all cards in Pool 2 before going to Pool 3. It was in this Pool 3 that players ran into problems. Pool 3 contained way more cards than the previous two Pools and that was because it was the last Pool in the game, until now.

In a recent update, Marvel Snap added another Series of cards into the game with the introduction of Series 4. Here are all the cards players can find in Series 4 or Pool 4 in Marvel Snap.

The interesting note about Series 4 or Pool 4 cards is that they can be acquired even though a player hasn’t collected all the Series 3 or Pool 3 cards. Once a player hits collection level 1000, they are eligible to find Series 4 cards from Collector’s Reserve chests but there is a catch, Series 4 cards are 10 times rarer than Series 3 cards making the chances of a player getting one unlikely.

🔹Series 4 & 5 cards are here—including Thanos and Galactus
🔹Find and pin your next card in the Token Shop and snag them with Collector's Tokens
🔹For balance changes, bug fixes, & more updates see the full notes 👇https://t.co/KYp6m0823H pic.twitter.com/lFDqsOJ701

In fact, when looking at the pull odds of getting a Series 4 card out of a Collector’s Reserve chest, the odds are two and a half percent, and the chance of a Series 3 card is a little more than 22%.  But to make sure that players know they have found a Series 4 card, here is a list of the 10 cards currently found in Series 4: