A look at the complete odds of what the Season Caches can have. 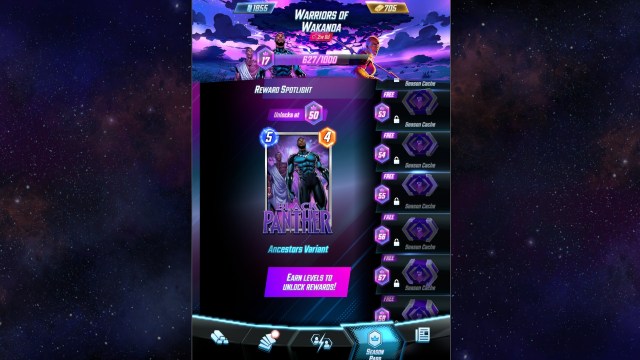 Screenshot via Marvel Snap Season Cache's could have Gold, Boosters, Credits or even Variants in them.

Marvel Snap continues to be one of the most popular card games on the mobile game market and especially so with new updates coming to the game constantly. One of the ways the game releases updates is through new seasonal battle passes which bring new cards, Variants and more.

But when players reach the end of the battle pass, they don’t unlock new set rewards. Instead, they get what are called Season Caches. Here is a breakdown of what Season Caches are and the complete content odds they have inside.

These Season Caches are essentially mystery boxes that can contain a variety of different things inside. Players unlock these with every level they get in a battle pass past level 50. Some things that can appear inside these Caches are currency like Credits or even Gold, Boosters for random cards or even Variants which are definitely the most sought-after thing for players. But the odds of these weren’t actually known for a while.

However, on the Marvel Snap discord Chief Development Officer Ben Brode — who helped lead development on Hearthstone back in the day —  answered the question for everyone. Here is how the breakdown works.

As you can see, getting Variants are the hardest thing to acquire out of the different options included in a Season Cache. On average it would take 20 Season Caches to get one random Variant. The two most common things players can acquire are either Credits or Boosters. Both combine to be 80% of the Season Cache odds with the higher amounts obviously representing the smallest chances among the 80%.

And then there is Gold. With Gold being the premium currency in the game, it comes as a minor surprise that players can even acquire some for free through the Season Caches but the odds are low. There is only a 15% chance to get any Gold in a single Season Cache with only a 5% chance to get 100 Gold.