All scenarios that would allow Fnatic to advance at Worlds 2022

All scenarios that would allow Fnatic to advance at Worlds 2022 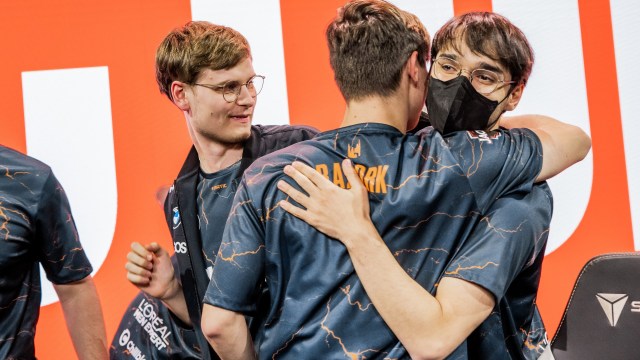 After a fantastic first half to Fnatic’s League of Legends Worlds 2022 group stage, the League European Championship third seed are in a fantastic spot to advance to the knockout stage at Worlds 2022.

However, even with a 2-1 start to their six-game group stage and with Edward Gaming and T1 also going 2-1, there is nothing guaranteed for Fnatic — but there are a lot of possibilities. Here are all the scenarios in play for Fnatic as they get ready for their final three games which will take place on Thursday, October 13.

EDG hand us our first loss in New York. Despite it, we're beyond proud of our performance in this first leg of Groups.

We've shown nobody is unbeatable, and this group is still ours to take. It all comes down to Thursday.

If Fnatic goes 2-1, they at worst would play additional tiebreaker games to see if they would get out of the group. Going 2-1 guarantees they won’t be eliminated after the six total games played, but that doesn’t mean they are guaranteed to make it to the knockout stage.

If the second round robin goes exactly like the first one, then Fnatic, EDG, and T1 would all be 4-2 which would trigger a three-way tie for first but also a three-way tie for third. Fnatic would have to win at least one tiebreaker game to get out in this scenario.

However, if the second round robin doesn’t go exactly as the first round robin, which would require either T1 or EDG losing two of their three final games, then Fnatic would guarantee at least second with a 4-2 final record. There are scenarios in play where Fnatic could still get first in the group with a 4-2 record either cleanly or through a tiebreaker. Cloud9 would most likely need to play spoiler for Fnatic to win the group with a 4-2 record.

If Fnatic goes 1-2 in the final three games they would no longer control their own destiny but would still have a chance to force a tiebreaker. For a tiebreaker to be forced with a 3-3 record, Fnatic would again have to rely on Cloud9 playing spoiler and them winning at least one of their final three games.

But in most scenarios, the only way Fnatic forces a tiebreaker is if Cloud9 goes 2-1 which would mean that there would be two 3-3 teams. There is also a wild scenario where the entire group could end up 3-3 which would require Fnatic, T1 and EDG to all go 1-2 and C9 go 3-0.

Because there are two other 2-1 team, an 0-3 second half would eliminate Fnatic from Worlds 2022 contention. In zero scenarios a 2-4 team can not make it out of this group.