A 3-0 record almost guarantees EG a tiebreaker game but even a 2-1 record could get them a chance at bonus games. 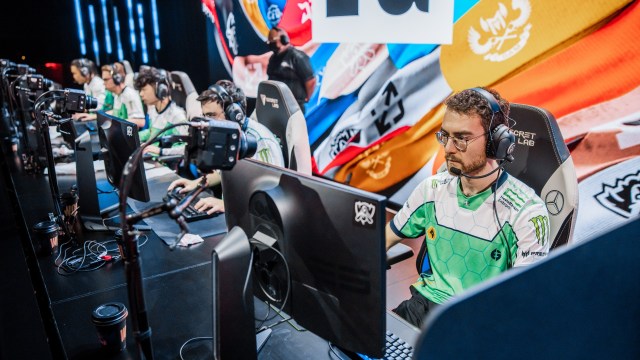 Provided by Riot Games/Getty Images/Colin Young-Wolff EG are definitely on the brink of elimination but there is still a chance.

It has been a historically bad first half to the group stage for Evil Geniuses and the entire North American region at League of Legends Worlds 2022.

The team going 0-3 in a group featuring G2 Esports, DWG KIA and JD Gaming were not on many people’s Pick’Ems, but with reality setting in, the team now has to turn things around quickly.

They cannot afford to lose a single game going forward. On the bright side, however, EG is still almost completely in control of their own destiny as not only can they still qualify for the knockout stage, they can technically still get out as the number one seed.

Here is a breakdown of all the scenarios in play for Cloud9 as they wrap up the group stage with three games on Friday, October 14.

WE BELIEVE IN THE TIEBREAKERS pic.twitter.com/i0aDkLjBRd

In an overwhelming amount of scenarios, EG is going to have to go 3-0 to even have a chance of getting out of the group. Unlike Cloud9, however, there actually is a scenario in which EG can go 3-0 and cleanly get out of groups without the need for a tiebreaker game. Obviously, that scenario is a far cry and would require DK to go winless and G2 to only beat DK. But if that happens, EG would advance cleanly as the second seed.

Even though there is a scenario in which EG cant qualify even with a 3-3, there is a scenario in which EG can force a tiebreaker with just a 2-1 record. In this scenario, they need JDG to go 3-0 with EG’s loss to them. If that happens and JDG goes 6-0, as long as DK goes 0-3 and G2 goes 1-2 with their lone win against DK, then there would be a three-way tie for second with G2, EG and DK all with 2-4 records which would trigger a tiebreaker game for EG.

Any other scenario with EG going 2-1 would eliminate them.

Obviously, with EG at 0-3 heading into the second half of the double round-robin, any performance that sees them go 1-5 or 0-6 would eliminate them from knockout stage contention. It is mathematically impossible for any team with a 1-5 or 0-6 record to get out of the group stage.