All Overwatch 2 average queue times for each role

All Overwatch 2 average queue times for each role 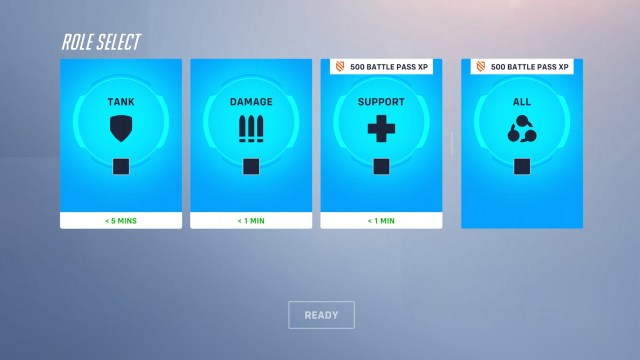 Provided by Michael Czar. The quick play queue times in Season 2 of Overwatch 2.

Overwatch 2, much like its predecessor, uses role queue for both quick play and competitive, and here are the average queue times for each role. With the recent change from 6v6 to 5v5, each role has a more balanced wait time, but changes based on rank and time of day.

To begin, let’s use my account as an example. With the start of Season 2, I am Gold in Tank and DPS, Platinum on Support, and playing on PC. Now, in American servers, wait times for all roles are as follows:

Now, these are the times given by the game. Sometimes, queue times can be shorter or longer based on a multitude of factors. These factors are applied to all players. For example, if you play in the Americas but in between midnight EST and 6 AM EST, you’ll probably get longer queue times than normal since most players are asleep. Of course, this depends on which region you play in as well, as different times and places can lead to different queues. Plus, even with crossplay on quick play, consoles matter for queue times on competitive.

Another thing to consider for queue times in Overwatch 2 is your rank. Now, if you’re Gold like me or in lower ranks, the times above should be about the same. The higher ranks you get to, the fewer players there are, which also means the longer the queues are. Platinum and Diamond shouldn’t be too bad, but any higher might lead to longer queue times.

Last but not least, another thing that can extend Overwatch 2 queue times is if you play with friends. The times shown above are solo queue times, but they vary based on if you’re in a party or not. If you’re playing with one friend, competitive queues won’t change much. But, the more you team up with, the longer the queues will take.

The best example of this is the classic team stacks, where you gather up enough friends to have an entire team. Those queues will take a while, as the game will try and match you up against another full team stack, or at least two other groups.