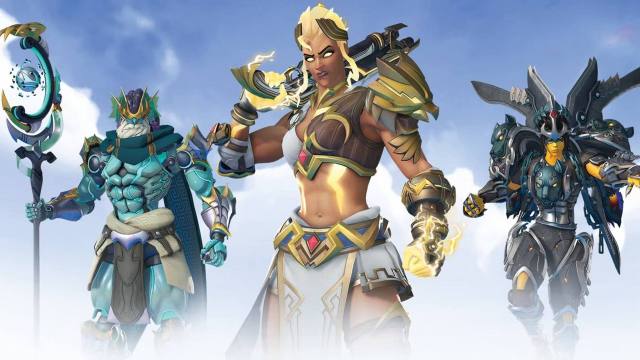 Provided by Activision-Blizzard. The Zeus Junker Queen skin, alongside the Poseidon Ramattra and Cerberus Pharah skins from Season 2 of Overwatch 2.

Season 2 of Overwatch 2 brings a new Battle Pass, with skins and rewards themed around Greek Mythology. Here is all the information available so far about the Battle Pass, including the skins that are coming with the Season 2 Battle Pass.

All contents in the Season 2 Battle Pass

To begin, a lot of what was on the Season 1 Battle Pass is returning in Season 2 of Overwatch 2. Just as before, the free Battle Pass offers limited cosmetics for experience earned in-game.  As for the Premium Battle Pass, worth either 1,000 Overwatch Coins or $10, it offers everything in the pass. Coins can be earned through in-game challenges, or from the Watchpoint pack.

As for the new hero in the Battle Pass, Ramattra, he’s moving up in the pass in comparison to Kiriko in Season 1. Where Kiriko was available at tier 55, Ramattra is available at tier 45, ten tiers earlier. Alongside confirmed more frequent weekly challenges, this means players can earn Ramattra faster than what was originally anticipated.

Hey all! Quick update on some changes coming to Season 2. After reviewing data for Season 1, we're moving Ramattra in to Tier 45 of the Battle Pass and making a few more weekly challenges easier to complete. Excited for you all to see everything new in Season 2 starting tomorrow!

Of course, with the new theme of Greek Mythology, we have some new skins and cosmetics. We have a Gorgon or Medusa version of Widowmaker, a Cerberus-inspired Pharah skin and a Posideon Ramattra skin. Plus, as shown in the Season 2 official trailer, items like a Gorgon’s head or a newspaper saying “Hard Carry”. Also shown in the video are other hero skins fitting in this theme, with Echo, Tracer, Ana and Symmetra skins confirmed. On top of all of that, a Hermes Lucio and a Cyclops Roadhog will come by in Season 2.

In Season 1, we had our first ever Mythic skin in Overwatch 2. Now, in Season 2, we have the second one, Zeus Junker Queen. Again, fitting the Greek Mythology theme, the skin glows with electricity.

Just like Cyber Demon Genji, the skin will have customizable features. In the trailer, those customizations are a red or blue variation of the standard Zeus gold.

A previous version of this piece reflected information which has since changed, particularly the tier which Ramattra is unlockable at.