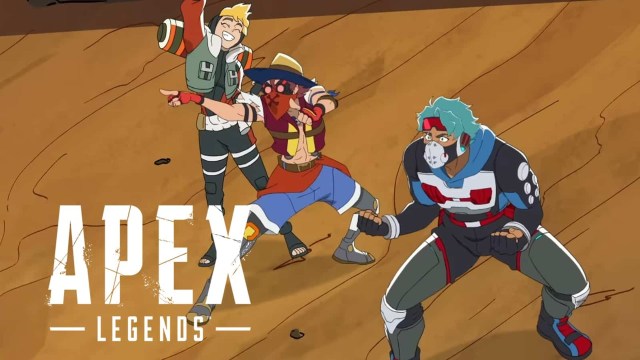 Apex Legends is no stranger to infusing anime themes into game cosmetics. The Gaiden Event in July introduced several legendary skins inspired by some of the most popular anime characters in the world.

The Gaiden Event lasted two weeks, allowing players to unlock and purchase over 40 new event items. With many Apex Legends skins released, here are the skins and their anime references made by Respawn Entertainment.

The Octane Skin known as Sea Legs Octane is a tribute to the global One Piece anime. Octane’s skin is modeled after Monkey D Luffy, the animated leader of the Straw Hat Crew from the anime. With a red handkerchief, chest scars, blue shorts, and straw hat, the crossover is instantly recognizable.

Wattson’s Lightning Spirit skin is inspired by the iconic Naruto anime. The bright orange for Wattson’s jacket mixed with black and green is a direct reference to the titular anime hero himself.

The Masked in Mirage skin draws its inspiration from My Hero Academia, a popular anime about a high school full of powerful characters with a variety of “quirks.” Mirage’s skin is modeled after Izuku Midoriya from the anime, combining the colors of his school uniform with the hero suit.

The Lifeblood Bloodhound skin refers to Ken Kaneki, the protagonist in Tokyo Ghoul. Ken Kaneki is a half-ghoul with a red eye, which fits in with Bloodhound’s tracking abilities.

The legendary Revelations Revenant skin is from the Neon Genesis Evangelion. Revenant takes after one of the huge robots from the Japanese anime.

The Strength and Power Crypto skin is a direct reference to the hit anime Dragon Ball Z. It references Goku’s orange and blue Dogi which he always wears.