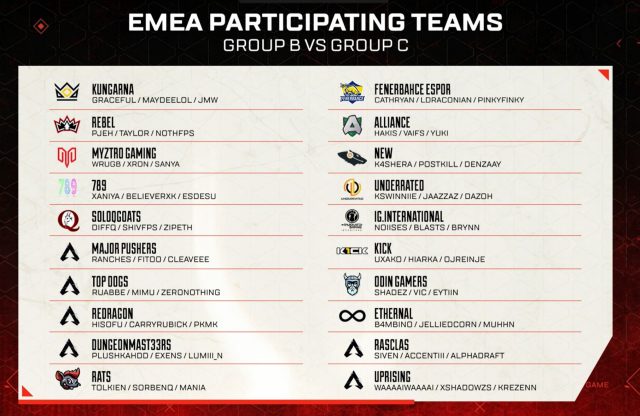 The first day of matches for the EMEA ALGS Pro League Split 1 kicked off on Saturday with a bang, quite literally. We saw six games of fragging, meta swapping, and intense Apex play as Group B faced off against Group C.

Though Rascals took first blood in Game 1, it was UNDERRATED and Jake “jaazzaz” Lock who ultimately took the first game in Saturday’s EMEA series. UNDERRATED managed to take the high ground during the final circle, raining fire down on the other two squads fighting below. Jaazzaaz then used a medkit and jumped down into the fray to finish things off.

Underrated looked strong again in this game. They pulled off a massive mid-game push against Kungarna, who had the high ground, by using their Horizon and Fuse ults to clear the other team out. But they didn’t manage to win the whole thing. Instead, DungeonMast33rs took it after prevailing in a final bloody teamfight.

Alliance looked poised to take an incredible clutch at the end of this game. Ethernal had the high ground in the circle and were able to leverage that positioning into taking out two of Alliance’s members, though Ming-Liang Oscar “Yuki” Jiang took two opponents out as well. The last man standing, Yuki took the do or die opportunity to try and really pop off, but he ultimately fell to MajorPushers in a 2 v. 1 battle. This was after MajorPushers had been down to one squadmate standing earlier in the game. Kirill “RANCHES” Rulin and Denis “cleaveee” Rassokhin were shot out of the sky, but Artem “fitoo” Ivanov managed to resurrect them after winning a 1-v-1.

In the final circle, it came down to Kungarna, DungeonMast33rs and NEW. NEW and DungeonMast33rs got into a fight first, which fed Kungara enough information to ultimately take the game.

soloQgoats have had just about enough! They take Game #5! #ALGS pic.twitter.com/OXahoNhNtX

Game 5 was a wild game that saw a three way 1-v-1-v1 between Kungarna, MajorPushers and Underrated within one of World’s End’s buildings. But ultimately, the game ended with pure aggression from SoloQGoats. They pushed left in the final circle and Mark “Zipeth” Christensen and Nicholas”diffq” David Espersen charged forward to clean up the straglers and take the game.

That's a wrap!
Wonderful last game for IG. International who take every opportunity to execute it right!
Day 1 of EMEA #ALGS Pro League did not disappoint. pic.twitter.com/3qQMag38Vv

In the sixth and final game of the day, Invictus (IG.International in Apex) won after an extremely clean game. They were able to overpower the final squads in the circle in a Mastiff fight, and took the game with relative ease.