A history of 'Hassanbowl' ahead of OG vs. Quincy Crew at International 10

A history of the ‘Hassanbowl’ ahead of OG vs. Quincy Crew at The International 10

SumaiL aims to draw the final blow at The International 10 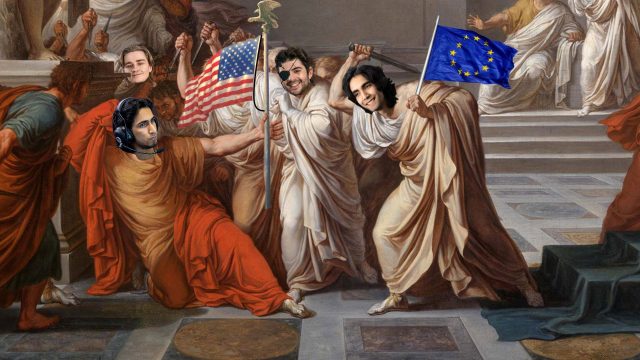 Provided by Kazakaron SumaiL aims to draw the final blow at the Hassanbowl 2021, colourized

The upcoming “Hassanbowl” at the International 10 could be the most exciting yet. The story of competition between siblings is one as old as time. Often, it’s siblings that bring the best, or indeed the worst, out of one another. That is the story of Hassanbowl, the headline for every large-scale tournament match where DOTA 2’s sibling rivalries are played out.

The history of the Hassanbowl

The sibling rivalry began with Syed Sumail “SumaiL” Hassan and Yawar “YawaR” Hassan. Both were children of Pakistani immigrants who moved to America. Both players started playing in the original Defense of the Ancients and kept playing through DOTA 2. Despite both being great players, SumaiL, the younger of the two, began to establish himself among the best players in the North American inhouse leagues. Soon enough, SumaiL was picked up by Evil Geniuses and within a year was the youngest ever International winner. The younger brother had become a millionaire within his first year of playing professional DOTA 2, a dream they both shared.

While SumaiL was stamping his mark on the history of DOTA 2, YawaR continued to struggle. He played on several small North American stacks before finding a home in VGJ.Storm, along with his current Quincy Crew teammates Arif “MSS” Anwar and Avery “SVG” Silverman.

Despite the hype, the Hassanbowl has yet to bring any close matchups. Every time the brothers have met, SumaiL has had the upper hand, with YawaR only winning one confrontation between the two, from six attempts.

Over the years, the rivalry has evolved, as SumaiL leaves the North American DOTA scene for OG in 2020. The brothers were now in separate regions, rarely ever meeting in battle. YawaR continued on with Quincy Crew to dominate the North American DOTA Pro Circuit. SumaiL looked to find a team in 2021, eventually returning to OG after some months of inactivity. The last recorded Hassanbowl was their matchup at ESL Summer 2021, which ended in a 2-0 OG victory.

Finally, we stand at the most important Hassanbowl yet. Both SumaiL and YawaR are set to meet at the Lower Bracket of The International 10. One best of three to determine who moves on in the largest DOTA tournament of all time. The other brother goes home. This final confrontation is years in the making, nay, decades. The Hassanbowl 2021 is a battle of regions, a confrontation of ideas, and a shattering of family ties. The brothers step onto the final battleground of DOTA 2, the great equalizer, for their final battle. It will be one for the ages.