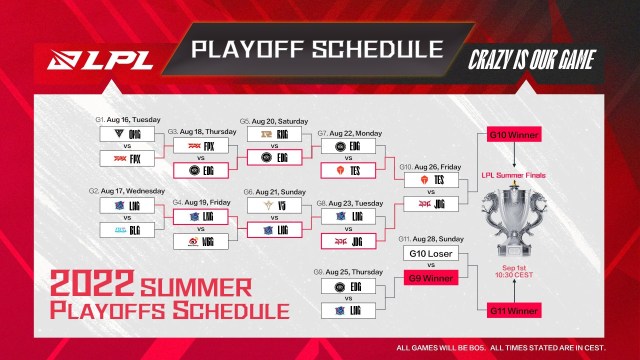 With the League of Legends Pro League having a double-elimination playoff format, the semi-finals of the 2022 LPL summer split is more like a potential finals preview. Top Esports will take on JD Gaming with a spot in the grand finals on the line. Here is a breakdown of how they got here and what each team needs to do to come out on top.

Just like in the League Pro League, the top two seeds have not disappointed so far in the 2022 LPL playoffs. With both teams finishing the regular season with 14-2 records, TES and JDG received three-round byes and have only needed to win one series each to get to the winner’s bracket final. Even the two teams’ game records are almost identical. TES ended the season with a 29-9 record while JDG ended 30-12.

At one point the season, TES rattled off 13 series wins in a row before going 1-1 during the last week of the season. JDG, on the other hand, didn’t have as impressive of a win streak but were consistently on top throughout the split. The crazy thing about these two teams is that their lone match of the season was way back in Week 1, before either team established themselves as the clear top teams. JDG took the series 2-1.

In their lone playoff series up to this point, JDG dismantled a red hot LNG Esports squad in three quick games. But TES were pushed to the brink by the defending world champions Edward Gaming. It took all five games for TES to put them away and were actually down in Game 5 before a clutch comeback win.

One would think the x-factor for TES in this series would be their league MVP jungler Gao “Tian” Tianliang. But with JDG having arguably a just as good jungler, that’s not how TES is going to win but its definitely a position they can lose the series with if Tian isnt on point.

However, TES does have a significant advantage over JDG in other critical position with the mid lane matchup. Zhuo “knight” Ding is no stranger to the spotlight as he is a former league MVP himself. He definitely put up an MVP-like performance in the summer split leading every player in the league in KDA and was just one player of the game award away from leading to league in that too.

Control the jungle, control the game. Tian leads us to game 5! #LPL pic.twitter.com/0wM8aLnr3t

His opponent is Zeng “Yagao” Qi a good mid laner in his own right but not nearly on the same level as Knight. If Knight can win lane consistently, the pressure he can bring to his side lanes as well as in teamfights should give TES the edge they need to win the series.

For JDG, their biggest strength has historically come from their jungler Seo “Kanavi” Jin-hyeok. Make no mistake, he is still the rock of this team but JDG has had a better performer this split which has helped the team just as much as Kanavi did to bring them this far. JDG top laner Bai “369” Jiahao was the top lane selection for the 2022 LPL summer all-pro team which he earned after picking up nine player of the game honors which led all top laners. In fact, his nine player of the game honors tied the league MVP Tian.

Multiple solo kills and took over teamfights, 369 going off in game 2! #LPL pic.twitter.com/nv5jnAlxbB

Just like Knight, 369’s opponent is a big mismatch. While TES’s top laner “Wayward” did pick up rookie of the split for his performance in the 2022 LPL spring split, summer has been an off season for him. According to Oracleselixer.com, Wayward is actually in the bottom half of LPL top laners in damage per minute and only slightly above average in KDA.

If 369 can get onto some hyper-carry top lane champions and push around Wayward, the top side of JDG could be what gets them into the LPL 2022 Summer finals.