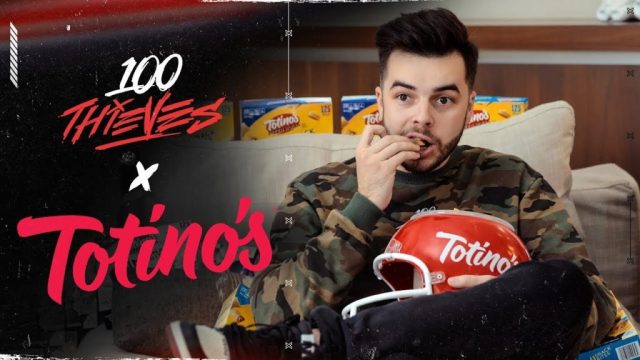 Back in February, 100 Thieves introduced General Mills-owned frozen pizza brand Totino’s as one of its main patrons. The deal was initially showcased through an ad featuring the team’s Call of Duty players, and promised fans a documentary series about the lives of the team along with it. That partnership has now extended to the organization’s Fortnite squad. Sponsored by Totino’s, 100T has secured a massive gaming house for their Fortnite team to live and train in.

The journey to the Fortnite World Cup starts tomorrow.

We're partnering with @Totinos to feature the Totino's World Cup House to better support our players along with a variety of Fortnite content over the coming months.

Along with the Fortnite team’s fancy new house, Nadeshot introduced another documentary series. The episodic, named “Loot”, will span 10 weeks. Similar to the team’s Call of Duty series, titled “The Heist”, Loot will follow the team to showcase their daily lives.

These developments should definitely benefit the 100 Thieves roster. Living under the same roof and building a bond with other top-tier pros is a good way to learn and improve their games.

The 2019 Fortnite World Cup will begin on April 13 and consist of 10 events that lead up to the World Cup Finals in July. The tournament will be a Solos event, played online, and also feature region-locking, so players can only compete against those nearby. To enter the competition on April 13, players must achieve Champion League ranking in Arena mode. They will then have a 3-hour countdown and ten match limit to earn as many points as possible

The top 3,000 players from each of the six regions will then move on to the Finals on April 14. The scoring system for the event will reward 10 points for a Victory Royale, with decreasing allotments for 2nd-25th place. Each elimination will also reward 1 point.

Think you have what it takes? Check out our guide on how to qualify for the Fortnite World Cup to learn more.